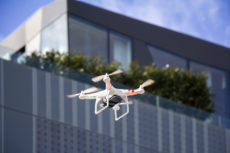 As the saying goes, “life imitates art.” Sometimes my research interests pop up in places I don’t expect. Recently it happened close to home.

I’ve written extensively on the use of drones as a tool of U.S. foreign policy. I’ve explored whether or not drones are more cost effective than their manned counterparts, looked at the casualty rates associated with drone strikes, and argued that drones not only fail to eliminate terror targets, but instead serve as a recruiting tool for terror groups.

One area I have yet to study in great detail, however, is the domestic use of drones by private individuals. While I have noted and continue to explore the expanded use of drones domestically by U.S. immigration authorities and state and local police departments, I’ve generally stayed away from looking at private users. To be honest, I just find these questions a lot less interesting.

Well, that may have to change after this past week.

First, I learned that one of my favorite fast food chains, Chipotle, in conjunction with Google, would begin delivering burritos to students at Virginia Tech. My husband and I eat more Chipotle than two functioning adults probably should, so this news led to a serious discussion in our house about how often we’d order if we didn’t have to go pick up our food. (We also wondered how many people would try to get free burritos by knocking packages off the drone. These “people” include my husband.)

But that’s not the only thing that happened which makes me think I may have to look more closely at private users and drone technology. Last week our neighborhood was in turmoil. What was the source of the controversy? A drone. Specifically, our neighbor’s drone.

At first no one was bothered (at least not enough to say anything). The drone flew a few times a day. Our neighbor’s technology succeeded in scaring off a couple of teenagers who were shooting off fireworks early in the morning. It was able to help find some missing dogs from our neighborhood and other close by communities.

After a few weeks, however, several people began to raise concerns about our neighbor flying his drone. Specifically, several neighbors stated they were incredibly uncomfortable at the idea of someone else having access to and using a technology that has the ability to lock on and follow targets and potentially look into people’s homes.

A firestorm ensued on the community’s online page. On the one hand, several neighbors were adamant that those concerned individuals were overreacting. Safety of the community, they contended, was worth the possibility of giving up a little privacy. They also stated that our neighbor has no intention of spying on people, citing that he offered to use the drone only after people expressed concerns over petty crime. Others countered, stating they didn’t know this neighbor personally, were not okay with his drone flying over their property, and were less concerned about what might happen if the drone didn’t fly than if it did.

I watched the community page in awe. It was a microcosm of drone controversy—in my own neighborhood! (We academics are a strange people and can get excited about very odd things.)

Eventually, the neighbor stopped his “drone patrol.” Though he insists his drone flights are legal and that his drone is registered with the FAA, he was unwilling to continue his operations in light of so much negative feedback. Other neighbors brought up recent regulations, claiming that his activities were, in fact, illegal. In addition to the debate regarding privacy, this highlights yet another argument surrounding drones. The laws they cited are new, poorly defined, and difficult, if not impossible, to enforce.

What happened in our neighborhood is indicative of the larger controversy surrounding both the private and public use of drones. Indeed, drones have some potentially helpful uses. In the case of our neighborhood, it was thought that the drone might deter some criminal activity. Drones have legitimate uses in agriculture, search and rescue, and even possibly delivering burritos! However, drones can also be abused. As I’ve noted in my research, drones can and are used to kill, maim, and infringe upon the most fundamental human rights. Privately, drones have the potential to be abused as well. I assume our neighbor’s intentions were honorable, but what if they weren’t? What if, instead of looking out for her neighbors, an individual uses a drone to spy or pry into personal business?

It all comes back to what is ultimately a question of constitutional political economy. That is, how can we design rules surrounding drones that get us the good things drones can do, but allow us to avoid the abuses? Is this even possible?

Unfortunately for my husband and I, I think we’ll be picking up our burritos for the foreseeable future.