A Cantaloupe Illustrates the Key to Prosperity 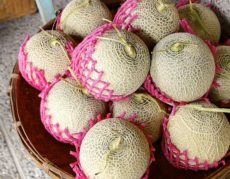 My family eats a lot of cantaloupes. We buy them from Lucio, a Mexican man who heroically hauls produce and other goods in his rickety pickup truck three times each week a hundred miles from Bacalar to our house on a wretched road at the extreme limit of the semi-civilized world in southeast Quintana Roo.

Yesterday, as I was about to cut up a melon, I noticed the label, which stated that the fruit had been produced by Pappas Produce in the USA. I immediately recalled Pappas Farms from my boyhood, when I worked in the summers for General Box Company making crates for the shipment of cantaloupes and putting colorful, artistic labels on the end slats. Pappas Produce continues to operate today, as it has since the 1930s, only now with a different, improved shipping technology. (In my day, the melons were graded, packed in wooden crates, loaded into railroad cars, and covered with crushed, blown ice to keep the fruit fresh while it was carried to markets around the USA.)

Pappas’s operation is located in Mendota, California, which is the little town west of Fresno to which my family moved from Oklahoma in 1951. We lived in a labor camp southwest of town for about five months before moving 25 miles up the road to Dos Palos, where my dad had found a better job on another ranch, and three years later we moved again to a ranch about midway between Mendota and Dos Palos, east of Firebaugh, where we lived from 1954 till I left home in 1961.

So, once again, as I enjoy the firm, sweet fruit brought to me thousands of miles from the place where I grew up, I have reason to declare, hurray for the free market. Hurray for private enterprise and enterprising immigrant entrepreneurs. Hurray for open international trade. And hurray for the free migration that allowed George Pappas to move from Greece to the USA in 1914 and, later, allowed my parents to move our family to a place where our economic fortunes promised to be better—as indeed they turned out to be.

If the workings of an ever-improving economic world have any single key, it is freedom of movement: freedom in every realm—of labor, capital goods, technology and other ideas, all sorts of goods and services, money, credit, and every other factor of production. Wherever governments impede such freedom of movement, they promote poverty where prosperity might have become more firmly established by people’s acting out their natural tendency to improve their economic conditions.

Beware anyone who argues that walls, tariffs, import quotas, immigration restrictions, and other impediments to freedom of movement will promote economic well-being. The only people who gain from such impediments are nativist busybodies and privilege seekers who have no defensible moral or economic basis for their actions, but thrive on ethnic bigotry, personal effrontery, and economic buncombe.