In a recent blog post, Bryan Caplan favorably quoted David Friedman, who claimed in his book Hidden Order that economists believed that everything—including happiness—can be measured in money, or in units of anything else, for that matter. Friedman and Caplan are deliberately trying to jolt the reader, but they believe the claim is defensible once put into context. Ironically, the Austrian economist Ludwig von Mises explicitly denied this viewpoint, arguing that subjective value by its nature cannot be measured. In this post I’ll explain Friedman’s position, and then show why Mises would have criticized it.

Let’s quote from Friedman’s book to understand his position:

This seems plausible if we are considering different consumption goods: cars, bicycles, microwave ovens. But how can a human life, embodied in access to a kidney dialysis machine or the chance to have an essential heart operation, be weighed on the same scale as the pleasure of eating a candy bar or watching a television program?

The answer is that value, at least as economists use the term, is observed in choice. If we look at how real people behave with regard to their own lives, we find that they make trade-offs between life and quite minor values. Many smoke even though they believe that smoking reduces life expectancy. I am willing to accept a (very slightly) increased chance of a heart attack in exchange for a chocolate sundae.

Even if you neither smoke nor overeat, you still routinely give up life for other values. Whenever you cross the street you are (slightly) increasing your chance of being run over. Every time you spend money on books or movies that could have gone for a medical checkup or additional safety equipment on your car, every time you eat anything a nutritionist would not have recommended, you are choosing to give up, in a probabilistic sense, a little life in exchange for something else. [David Friedman, Hidden Order, pp. 14-15.]

As the above quotation illustrates, when Friedman says economists believe that “everything can be measured in anything,” he means that economic science assumes that each individual has a single scale of value, upon which we place the benefits and costs of all potential actions. A critic might think you can’t compare “saving children’s lives” to “eating a pizza,” but when you are deciding on how to spend your paycheck, you have to make such a comparison. That is, you have to decide if you get more utility from spending a given amount of money on buying a pizza, versus donating it to a charity that helps poor or sick children.

Although I agree with the spirit of Friedman’s analysis, I actually disagree with his statements. He repeatedly says that an individual is measuring the value of different possible options. Yet some notable economists, including Ludwig von Mises, disagreed. Furthermore, this isn’t some trivial matter of nomenclature: It is essential to understanding the nature of value itself, which is the bedrock of modern price theory. 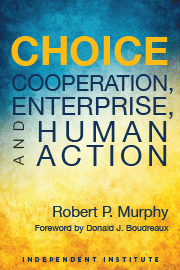 For a full exploration of the thought of Mises, see my book Choice, published by the Independent Institute. Yet for our purposes in this blog post, a few quotations will suffice to show where Mises agreed with Friedman, and where he disagreed (sharply).

First, the agreement. Like Friedman, Mises argues that economics analyzes human action as placing all possible satisfactions onto a single scale of value:

Acting man values things as means for the removal of his uneasiness.... In valuing very different states of satisfaction and the means for their attainment, man arranges all things in one scale and sees in them only their relevance for an increase in his own satisfaction. The satisfaction derived from food and that derived from the enjoyment of a work of art are, in acting man’s judgment, a more urgent or a less urgent need; valuation and action place them in one scale of what is more intensively desired and what is less. For acting man there exists primarily nothing but various degrees of relevance and urgency with regard to his own well-being. [Mises, Human Action, p. 119.]

As the quotation above indicates, Mises agrees with Friedman that people place all satisfactions on a single scale of value. However, I still maintain that Mises would not agree that these individuals are measuring value.

Now at this point, we can imagine Friedman pushing back by asking, “What’s the problem? If we evaluate the potential satisfaction from a work of art, along with the potential satisfaction from a pizza, using the same scale of value, then doesn’t that mean we are implicitly measuring value in pizza-units as well as in art-units? Hence my claim, that economists ‘think everything can be measured in anything’? Use an analogy with length: If you agree that we can place a baseball bat and a pencil on the same scale of length, then can’t I measure baseball bats in terms of pencils?”

But to repeat my original claim, the mere fact that we can place disparate satisfactions on the same value scale is not the same thing as saying we can measure the subjective value of the different satisfactions. Let us quote again from Mises:

Action is an attempt to substitute a more satisfactory state of affairs for a less satisfactory one. We call such a willfully induced alteration an exchange.... What gratifies less is abandoned in order to attain something that pleases more. That which is abandoned is called the price paid for the attainment of the end sought. The value of the price paid is called costs. Costs are equal to the value attached to the satisfaction which one must forego in order to attain the end aimed at.

The difference between the value of the price paid (the costs incurred) and that of the goal attained is called gain or profit or net yield. Profit in this primary sense is purely subjective, it is an increase in the acting man’s happiness, it is a psychical phenomenon that can be neither measured nor weighed. There is a more and a less in the removal of uneasiness felt; but how much one satisfaction surpasses another one can only be felt; it cannot be established and determined in an objective way. A judgment of value does not measure, it arranges in a scale of degrees, it grades. It is expressive of an order of preference and sequence, but not expressive of measure and weight. Only the ordinal numbers can be applied to it, but not the cardinal numbers. [Mises, Human Action, p. 97, bold added.]

Thus, although choice necessarily involves putting all potential goals on a single scale of value or preference, this does not imply that the individual measures the value of each possible outcome, and then picks the one with the highest reading.

The best way I have come up with to motivate Mises’ position on value is to draw an analogy with friendship. It makes perfect sense to say that Billy ranks his friends. Tommy is his best friend, John is his 2nd best friend, Sally is his 3rd best friend, and so forth. If Billy is going to have a birthday party and his mom says he can invite ten friends, Billy can make that choice. If she then tells him there’s good news and the venue can hold one more child, then Billy will determine who his 11th-best friend is and invite him or her too.

We can even say, if we wish, that Billy possesses more friendship with Tommy (his best friend) than he does with John (his 2nd best friend).

However, it would be nonsense to say, “Billy has 38% more friendship with Tommy than with John.” That’s because friendship is not a cardinal magnitude. Billy doesn’t have “friendship units” with the other children, that he can measure and then rank from best to worst. Even so, we can still evaluate Billy’s choices and determine who his best friend is, etc.

Mises argued that this is true with choice and value in general. Whenever someone chooses A over B, he demonstrates that he prefers A to B, and that A is more valuable to him than B is. But such choice could never allow us to infer the magnitude of the preference, such that it could be measured in objective units. This would misconstrue the nature of value, and how it fits into modern price theory in the wake of the marginal revolution.

In summary, Mises would have agreed with David Friedman that people place all items on a single scale of values. But Mises would deny that this valuation involves (even implicitly) acts of measurement.