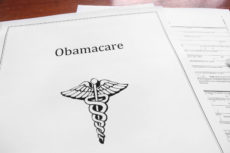 Obamacare crushes jobs because of its loopy distribution of tax credits. As discussed previously, the (premium-reducing) tax credits for Obamacare coverage phase out in such a way that beneficiaries face very high marginal income tax rate hikes at household incomes up to 400 percent of the Federal Poverty Level.

However, even those who increase their incomes despite the higher tax burden face the hassle of figuring out how much they owe in tax and premium at the end of the year. This nuisance imposes a dead-weight loss on the economy, wasting people’s time and energy. Here is an example:

But after a sudden increase in income and the arrival of tax season, Foley’s situation began to get messy. An $800-plus bill with errant charges from Kaiser Permanente, his insurance provider, unexpectedly propelled Foley into the inner workings of a young, government-sponsored program as he searched for a refund.

Foley’s tax dilemma centered on the repayment of the Advanced Premium Tax Credit, a government subsidy that helps reduce the premium costs of plans purchased through state-run insurance exchanges.

From the get-go, Foley was supposed to repay the tax credit directly to Uncle Sam, not to Kaiser. In other words, in his case, Kaiser essentially got paid twice and Foley was on the hook for another large tab.

This convergence of taxes and health care has been problematic for others, too. Roughly 1.4 million tax filers last year did not report their Obamacare tax credits properly or at all, according to IRS data released in January.

For someone whose income at the end of the year is different from what he anticipated at the beginning of the year, the arithmetic would be difficult even if the tax credit were transparent. However, it is not transparent. Tax credits are paid to insurers for the benefit of subscribers, not subscribers directly. For political purposes, this is underemphasized when applying for coverage through the exchange. Beneficiaries are induced to believe Obamacare has reduced premiums versus the individual market that existed pre-Obamacare. The fact that actual premiums are significantly reduced by tax credits is not detailed during the process.

A solution to this confusion would be to replace the loopy Obamacare tax credit with a universal tax credit, perhaps adjusted for age but not for income. If (to limit costs to taxpayers), the existing credit must be phased out by income, it should phase out at a flat rate, and not impose a roller-coaster of marginal tax rate hikes on those who seek to increase their incomes.