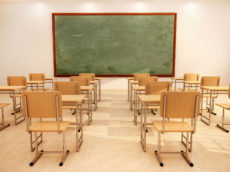 I do not speak Spanish fluently. Indeed, I am often at a loss for the right words, not to mention a proper conjugation of the verbs, and I frequently fail to understand what people say to me. Yet all in all, I am astonished that, living in a part of Mexico where few people speak English, I get by as well as I do. And whenever I spend a day in Chetumal, as I did yesterday, dealing successfully with one sort of business or another, I never fail to remember with gratitude my high-school Spanish teacher, Mrs. Tocher, who taught me at least 90 percent of the Spanish I know today. She will always hold a cherished place in my affections.

Nor is she the only one of my high school teachers I revere. Above all, I am indebted to Mrs. Raven, my 9th grade English teacher, whose instruction in English grammar has carried me through a fair degree of success as a writer and editor over a span of fifty-five years or so. She and my other English teachers introduced me to some of the timeless works of English literature, especially several of Shakespeare’s greatest plays, along with books such as Dickens’s Tale of Two Cities and Great Expectations, among others. Mrs. Malm, my 12th grade English teacher, began to hone my skills as an essayist. Several math teachers did a creditable job of teaching me algebra, geometry, trigonometry, and elementary calculus, and “Prof.” Silver, an elderly science teacher, gave me a decent grounding in chemistry and physics. Mrs. Hume, in a semester of the 9th grade, taught me how to type and write proper business letters, skills that I have been putting to good use for nearly sixty years. To all of these dedicated and competent teachers I remain deeply indebted.

Now, I ought to mention that these teachers worked for a government school, Dos Palos High School, a rural institution in California’s San Joaquin Valley, about 50 miles west of Fresno, that drew its students from an area of perhaps 40 miles or more in diameter, employing a fleet of buses to carry us to and from school five days each week. I lived in the outer reaches of the school’s service area, and because I remained after school for athletic practice, I normally did not get home until 6 o’clock or so each afternoon. So I spent a lot of time on the bus, reading novels about short boys who against all the odds ended up making the winning shot from the half-court line as time expired in the state championship basketball game—you see, I had dreams of my own in those days.

How, one might ask, did I manage to acquire such an excellent high-school education from a government school, the sort of school that nowadays performs so badly? Several reasons suggest themselves. First, the public schools in those days—I attended high school between 1957 and 1961—were pretty much local in their management, control, and operation. No doubt they had to adhere to some state guidelines, yet they were largely free to provide the kind of schooling that their local “customers” found to be valuable (including a great deal of vocational as well as academic instruction). Second, teaching was still a respected profession, especially for talented women, who had fewer professional alternatives in those days. Third, because the school teachers and administrators enjoyed a substantial measure of community respect and trust, they were able to maintain enough discipline and control of the often-rowdy students to make learning possible for those who wished to learn. My parents would never have dreamed of quarreling with the school authorities. If I had got into trouble there, they would have backed the school all the way. (Fortunately I managed to stay out of serious trouble at school.)

Of course, once the conditions I’ve just described began to change in the latter half of the 1960s, the government schools began to go to hell, and they went there remarkably quickly between 1965 and 1975 or so. They have never recovered, and in some important respects, such as serving as dispensers of trendy, politically correct propaganda and bogus science (especially in regard to “the environment”), they have become much worse. When federal funding and its associated red tape intruded onto the scene from the latter 1960s onward, poor performance was well-nigh guaranteed, and the character of the schools changed irrevocably for the worse insofar as the children’s learning was concerned. Decentralization had been the saving grace of the government schools, and once that had been effectively destroyed, no such grace remained, only a mass—and a mess—of rule-following, with many of the rules being more or less stupid or merely political in their instigation.

Well, that’s progress, they say. But I don’t see it that way. In my view, the developments in public schooling since my days as a student there more than fifty-five years ago have been overwhelmingly regrettable, and I doubt that many students today, even in the better suburban schools, come away with as valuable an education as the one I received in that long-ago time in a “backwoods” (in my case, back desert) high school.