Is a Dystopian World Closer Than We Think? Thoughts from Hiroshima 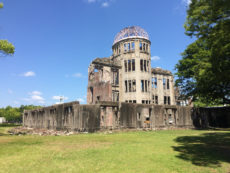 The A-Bomb Dome at the Hiroshima Peace Memorial Park

Bestselling dystopian young-adult (YA) literature has inspired some of the biggest films of recent years. Many of these books, including The Hunger Games, the Divergent series, and the more modestly performing Fifth Wave, have been set in the aftermath of global war, geo-political events that bring human societies to near annihilation. While these stories are fictional, the reality of the setting is not as far fetched as many readers might think. A recent trip the Hiroshima Peace Memorial Park was a sobering reminder of how close these dystopian futures might actually be in the wake of modern warfare.

Few of these YA authors, whether it’s the authoritarian hegemony of the Capital District in The Hunger Games or the class-based hierarchies embedded in the faction system governing Chicago in Divergent, seem to acknowledge how events leading to their dystopian worlds are remarkably easy to recreate in the real world and how dangerously close we have come to doing this. A simple look at the after effects of the atomic bombs dropped on Hiroshima and Nagasaki are perhaps our best examples. My visit to the Hiroshima Peace Memorial Park perhaps did more than any of my reading or self-education on the effects of war to translate fears and worries about nuclear war into a understanding of its horrific reality. 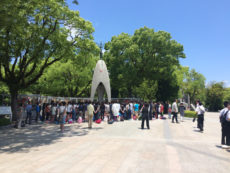 Standing beside the iconic A-Bomb Dome—a burned out frame of a building left behind after the blast—I pictured the neighborhood of nearly 1,000 artists, professionals, craftsmen that lived there before the bomb leveled it in mere seconds. The dome is near the epicenter of an explosion that leveled a square mile of the city, scorched even more miles, and instantly killed tens of thousands of human beings through incineration—the vast majority civilians and children. The pictures of this area of Hiroshima months after the bomb blast reveal a desolate landscape. Images of the survivors in the museum provide irrefutable evidence that the Japanese that survived were now existing in a living apocalypse, without food, minimal shelter, and scant medical attention, many with injuries so deep and severe that their lives would be mercifully short. Imagine the zombies in the Walking Dead as if they were real people, just hours away from death as their bodies shut down from massive burn trauma without the benefit of medicine or medical care. The city center was devastated, infrastructure was in tatters, supply chains were obliterated. Red Cross supplies took months to arrive. The after effects, from cancers cropping up later in life to horrific disfigurations resulting from flesh melted into scars, lasted generations.

The difference between the real world of nuclear war and dystopian literature that captures the imagination of millions of readers is that the humans in the aftermath of the bombings of Hiroshima and Nagasaki recognized the danger of nuclear weapons and their potential to annihilate the human race before they actually did it. Rather than choose authoritarianism and oppression, they charted out a course for democracy, markets, and freedom. Japan was rebuilt, economically, socially, and politically. In Japan’s case, a Constitution was crafted that prevents the nation from going to war for offensive purposes (e.g., conquering other nations or people). The principles of non-aggression and peace promotion forced on them by the victorious Allied Powers have become ingrained in a significant part of Japanese culture. More globally, the policy of “mutually assured destruction” which led to the nuclear arms race between the U.S. and Soviet Union was built on the premise that nations would not actually risk the destruction of the world for the goal of domination and conquest. 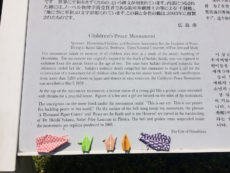 The peace park in Hiroshima is not just about death and destruction. It also includes a reminder of the hope and optimism that defines much of the human experience in the face of tragedy. The Children’s Peace Monument memorializes the hopes and dreams of a young bomb survivor, Sadako Sasaki, who developed leukemia as a teen. As she neared death, this teenage girl had a vision that her wish for a nuclear weapon free world would become reality if she could create 1,000 origami cranes. She passed away in 1955 at age 12, but she became a symbol of peace and peace-building. Now, thousands of Japanese school children visit her memorial, sing, and symbolically make origami cranes to give to strangers and visitors to the park. Others that make their way to the monument can reflect on the tragedy and horror of war, of innocent lives taken and lost.

While many visitors to the peace park see the A-Bomb Dome as the iconic symbol of the horrors of total war, I didn’t find it a compelling image. It’s a building. The real horrors of war are what it does to human beings and our ability to create, innovate, and improve our lives. The Dome represents the destruction of physical space, and indirectly places. Dystopian YA novels get it right: The horrors of war are really human tragedies.

For me, the children’s peace monument, perhaps more than the museum itself or the Dome, is a tribute to the power of people to alter their own destiny when faced with the horrors of what human beings have created. The seemingly irrational act of building 1,000 cranes to secure one wish has motivated thousands to change the way they view themselves in the world, and to work rationally toward peace. It reinforced a cultural commitment to peace and nonaggression. This monument to a young girl whose native nation’s aggressive actions contributed to bringing her nation to collapse, the world to the brink of apocalypse, has humanized our perspective on the horror of total war. Her hope and dedication to peace in the aftermath of a nuclear attack, however justified for strategic purposes to end the war, and our ability to validate it in our culture, might represent the best testimony yet as to why dystopian literature will likely remain fiction and not prophecy.