You Aren’t Entitled to a College Education 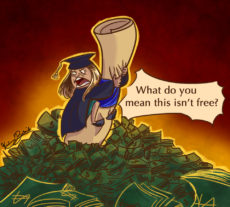 When I graduated from college, reality hit. I was now considered a “real adult.” In a matter of months I’d be moving out of my parents’ basement and some 700 miles away to start graduate school.

I was also struck by something I knew was coming, but hadn’t quite appreciated.

That “something” was my student loans.

There they were in black and white, those things I’d been taking out for some 48 months to pay for a Bachelor’s degree from a small liberal arts university. I owed tens of thousands of dollars and the bill was coming due. (For the record, I could have deferred payment as I was going to graduate school, but chose not to in order to avoid paying more interest.) I remember feeling overwhelmed. I’d never owed that much money in my life!

Certainly, I am not the only one who has faced student loans. It’s estimated that my follow graduates and I owe more than $1 trillion for their educational expenses. About 70 percent of graduates in 2014 had student debt averaging about $33,000.

It’s not uncommon to hear people complain about their loans—the interest rates, the cost of college overall, etc. I sympathize entirely. When I advise students, I’m very careful to help them map out their schedules. I tell them, “we don’t want you on the eight year plan.” Indeed, I want the best for my students. That means getting them out of school, finished with their degree, and working as soon as possible. (Despite what people say, it’s doable in four years if you’re careful—five if you have a few hiccups.)

But there are many people who view their loans differently than I did. While I looked at my loans as a means to an end—I could not have afforded to go to university without them—many see them as an affront to their sensibilities. Indeed, many individuals feel as though they are being taken advantage of because of their loans.

Others go further, suggesting that they and others are entitled to a college education. The fact they have loans at all fills them with disgust. Some suggest there is a moral imperative when it comes to education. Others, including democratic presidential candidate Bernie Sanders claim that higher education is a human right. The fact that many people struggle to pay for an education, or come out owing thousands of dollars, is a violation of their rights.

Sorry to disappoint Mr. Sanders—people do not have a right to a college education.

We can define rights in one of two ways—positive or negative.

The “right” to a college education would be considered a “positive right.” A positive right means that someone else is required to provide a person with a particular good or service if he or she cannot acquire it on their own.

This is in contrast with “negative rights.” Negative rights require nothing from anyone else, only that they leave you alone. Examples of negative rights would be things like freedom of speech, religion, and assembly.

It seems to me that the seemingly endless push for “free” college, the forgiveness of student loans, and the consistent complaining about loans is indicative of two things. First, it shows that economics is painfully needed. (There is no such thing as free—ever—EVER—EVER!) Second, it illustrates a gross sense of entitlement.

Take, for example, this article, published a year ago in the New York Times. In it, the author discusses his reasons for defaulting on his student loans, after using them to obtain both an undergraduate and master’s degree.

I could give up what had become my vocation (in my case, being a writer) and take a job that I didn’t want in order to repay the huge debt I had accumulated in college and graduate school. Or I could...[default] on my student loans, which was the only way I could survive without wasting my life in a job that had nothing to do with my particular usefulness to society.

I chose life. That is to say, I defaulted on my student loans.

How incredibly self-absorbed. What this author argues, in essence, is that he could not bring himself to actually face reality that his “vocation” would not allow him to meet his obligations. He had, by his own admission, viable alternatives, ones that would allow him to pay off his debts, but he decided that his pride was more important than honoring his commitments. He decided to allow other people to pay for his poor life choices.

This scenario is repeated over and over again. People make the choice to go to college. Once in school, they make choices about their classes, their work ethic, and their grades. They bear the consequences of these actions—both good and bad. If you work hard, get good grades, and major in math, you’ve set yourself up much better than someone who went to keg parties, got straight “Cs” and majored in gender studies. Maybe it’s your “passion,” but other people aren’t obligated to help your pursue it.

As I mentioned, I went to a small liberal arts university. I wouldn’t change this decision. At the end of the day, that environment shaped me into the person I am today. It introduced me to the economic way of thinking and prepared me for graduate school. But it was a choice. I could have made others. I could have worked before going to school to save up money. I could have gone to one of several large state schools in and around the city. This would have cut my costs dramatically. I could have taken more classes instead of working over the summer and throughout the year. But I didn’t. Hundreds of thousands of other Americans have done the same. They’ve invested in their education with someone else’s money, and now they’re paying it back.

And they should pay it back. An education is a privilege, not a right.