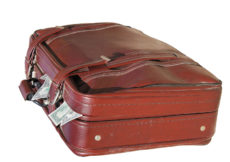 Anyone (individual or family) who enters the USA is required to fill out CBP Form 6059B, whereupon one must provide various personal information and answer several questions. One of the questions asks whether one is “carrying currency or monetary instruments over $10,000 U.S. or foreign equivalent.” A paragraph on the back of the form explains:

The transportation of currency or monetary instruments, regardless of the amount, is legal. However, if you bring in to or take out of the United States more than $10,000 (U.S. or foreign equivalent, or a combination of both), you are required by law to file a report on FinCEN 105 . . . with U.S. Customs and Border Protection. . . . Failure to file the required report or failure to report the total amount that you are carrying may lead to the seizure of all the currency or monetary instruments, and may subject you to civil penalties and/or criminal prosecution.

Okay, boy and girls, let’s think about this demand, with which one must comply in order to gain lawful admission to the USA.

First of all, what right has the state to demand this information? It recognizes that even by its own “laws,” carrying into or out of the country currency or monetary instruments in any amount is legal. So what possible grounds justify the demand for a confession that one is carrying out a lawful act? It’s none of their business. They do not maintain that such carriage of funds is a crime or necessarily related to a crime, yet they criminalize a mere failure to divulge the carriage across the border of funds in excess of $10,000 USD—indeed, they outright threaten to steal all of one’s money as well as, perhaps, to fine or imprison the “violator.” No one’s natural rights are violated merely by someone’s carrying funds into or out of the USA. There is no victim. The only criminal act in this context is the government’s threat to punish—or its actual punishment of—people who do not divulge a perfectly legal action.

Second, the state is acting here as if it has a right to know everything about you, legal as well as illegal. How does it suppose that it has acquired such a right? I might as well ask the border thug whether he has good sex with his wife or girlfriend. I have just as much right to insist that he answer my question as he has to insist that I reveal how much money I’m carrying. In neither case does the interrogator have any right whatsoever to demand an answer to his question. Asking is bad manners, and threatening violence for a refusal or failure to answer truthfully is an outrageously criminal act on the part of the state.

The state has long since o’erleaped its just bounds, if indeed any such bounds existed in the first place for an organization that is intrinsically criminal. If states wanted, say, to enforce laws against murder or rape, I would not oppose the ostensible objective as such, though I would seriously doubt their true motives in undertaking this task. But for 99 percent of the actions that the state has criminalized, no such relation to the enforcement of natural justice exists. The state has simply taken it upon itself to criminalize thousands of actions that are not genuinely criminal and indeed ought never to have been dealt with by state functionaries at all, much less made the occasion for bullying and penalizing peaceful people.

We get used to putting up with this nonsense. Perhaps if people paused to ask whether it makes any sense at all, they would be more inclined to make waves about it with their so-called political representatives. Or perhaps they have already been too relentless crushed under the state’s jackboots and have become too timorous to speak up against anything, no matter how outrageous it may be.