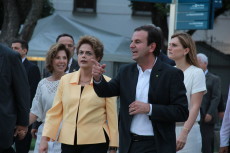 A technical committee of the Chamber of Deputies has voted to recommend the impeachment of Brazilian President Dilma Rousseff. If two-thirds of the lower house of Congress vote to impeach her, her fate will rest with the Senate, where a simple majority will certainly accept the case. During the process, Rousseff will be suspended and replaced by her Vice President and political foe, Michel Temer, until a final decision is reached.

A “fin de siècle” atmosphere has pervaded Brazil as the country has descended into the moral abyss of Operation Car Wash, the corruption case that has engulfed the political class and the business community. This process has coincided with the collapse of the populist, statist socioeconomic model that has dominated the country under the Workers’ Party for a decade and a half, first under Lula da Silva and then under Rousseff.

Although Rousseff was the head of Petrobras, the state-owned oil giant, when most of the graft took place, Operation Car Wash, a vast scheme of bribes exchanged for succulent public work contracts primarily related to that entity, has so far failed to produce evidence that she was personally involved. There is little doubt, however, that she turned a blind eye when the evidence of what was happening surfaced and that she has tried to protect some of those involved, including former president Lula, who is now largely running her government.

This is why her foes have opted for going after her on an issue for which she bears a more personal responsibility—tinkering with fiscal budget in order to conceal the true state of the government’s finances and boost public spending before the 2014 election. There could be a link between the manipulation of the budget and the corruption scheme organized through Petrobras because some of the funds illegally paid to political operatives may have been used in Rousseff’s campaign. The testimony of Joao Santana, the manager of her and Lula´s campaigns, who was arrested a few weeks ago, will be critical.

A majority of Brazilians, many of whom have taken to the streets in mass demonstrations, want Rousseff out. There is a widespread sense that she is not only responsible for the general debacle but that she will be unable to make decisions, let alone bring Brazil out of the economic quagmire during this traumatic crisis. She has clung to power thanks in part to the fact that her enemies, including the PMDB party of her Vice President and of the head of the Chamber of Deputies, is also tainted by the corruption scandal, and to a coterie of small political parties.

But all this seems to be changing. The governing coalition is crumbling: Not even Lula´s efforts to buy the support of former allies with pork-barrel projects and federal money transfers seem able to stem the tide.

There is a more dignified way than Rousseff’s impeachment to put an end to the Workers’ Party era that has turned Brazil, the engine of South America, into a key factor in the inability of the region to break away from its underdeveloped condition. Resigning, as the country’s leading newspaper recently stated, is the best service the President could render her country.

It is time for Brazil to get back on its feet and lead the way. The moral regeneration, and the modernization of the political structures and the socioeconomic model will not happen until this dark period in Brazilian history is put behind. It starts with Rousseff assuming responsibility and the constitutional process taking care of the transition.