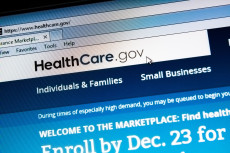 The Obama administration recently announced that 12.7 million people selected or were automatically enrolled in an Obamacare exchange plan at the end of the third open season – February 1. Except for special cases, anyone who missed that deadline cannot enroll in an Obamacare plan for 2016.

One explanation for some volatility is that eligibility for discounted premiums via tax credits paid to insurers in Obamacare exchanges depends on income. If an enrollee’s income drops, he may fall into dependency on Medicaid. If his income rises, especial through getting a job with health benefits, he will drop Obamacare coverage in favor of employer-based coverage.

However, that churn should be fairly constant throughout the year. It cannot explain the dramatic changes in Obamacare enrollment. Another explanation is that people are duped into enrolling into Obamacare by messages telling them how inexpensive it is, then drop it when they see they cannot afford it.

Fair enough, but we are in the third year of enrollment. It is hard to believe people just keep coming back for more punishment. The remaining explanation is consistent with the evidence that Obamacare beneficiaries are sicker than either the insurers or the administration expected: It is that some people let their ailments build up throughout the year, wait until open enrollment, sign up for coverage, get medical care, and then drop coverage.

That is not a well-functioning insurance market.