Can the State Enforce Virtuous Behavior? 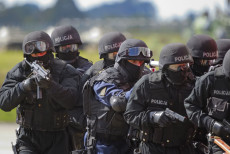 For thousands of years, states (or equivalent ruling organizations and elites) certainly have acted as if they could enforce virtuous behavior—always of course according to the particular conception of virtue they happened to cherish. And many continue to do so today. Thus, most U.S. states still prohibit possession of, use of, and commerce in a long list of narcotics and other substances deemed bad for people. Governments have often forbidden free markets in sexual services, gambling, and even doing business on Sunday. They have made various sorts of speech unlawful, along with all sorts of communication in schools and in the labor market. They have outlawed many kinds of interactions, from marriage on down a long list, between adults and persons under a stipulated age of legal consent, sometimes as old of 21 years. So, governments clearly purport to enforce virtuous behavior—or, at least, the avoidance of vicious behavior—among those subject to their rule.

But do they succeed? They obviously do not succeed fully, and in many cases they fall so far short of success that their “virtue laws” are a laughing stock notwithstanding severe penalties provided for convicted violators. Although prostitution has been outlawed far and wide, for example, it has been practiced just as pervasively. Likewise for gambling. Indeed, in many cases, as in states with state-sponsored lotteries, the state has not forbidden gambling as such, but only private gambling that competes with the state’s own gambling enterprises, thereby making a mockery of the idea that it seeks to discourage a vice. An entire sector of the underground economy is involved in supplying the active demands of people who wish to use drugs, patronize prostitutes, gamble, or otherwise engage in “vicious” behavior the state has outlawed. So, at best, the state’s attempt to enforce virtuous behavior is a flop everywhere the state makes such an attempt.

But to call it a flop does not go nearly far enough, because states that purport to enforce virtuous behavior actually create conditions in which they not only fail to achieve their ostensible aims, but actually create conditions and incentives that wreak great harm on the society their “virtue laws” supposedly will protect or improve. So, for example, the state forbids dealing in various narcotics, which does not stop such dealing but drives it into the black market, where suppliers and demanders have no access to the ordinary court system and therefore, not infrequently, use violence to settle their disputes. By making drugs illegal, states ensure that quality-control measures will be poorly developed and implemented in the markets where people buy drugs, with the result that many people are cheated by low-quality products, poisoned by adulterated products, and even killed by products whose strength and purity the purchasers cannot readily assure. When the state drives prostitution into the black market, health conditions among the prostitutes cannot be kept up as well, and the prostitutes may spread harmful and even deadly diseases as a result. Making various commercial transactions illegal also creates an incentive for corruption of the cops, prosecutors, and judges charged with enforcing the “virtue laws.” Hence, during Prohibition, bootleggers and crooked cops went together like peanut butter and jelly, and today many police play an integral role in protecting drug dealers, bulking up their incomes by accepting bribes and by stealing drugs, cash, and other valuable items from people they claim have engaged in drug trafficking. In some countries the drug lords and the lawful government leaders are so closely connected that they are almost one and the same.

So, to answer the question I posed at the outset: no, the state cannot successfully enforce virtuous behavior—people will strive to do what they strongly prefer to do—but it certainly can create conditions that foster vastly more harm than would occur if the state simply left people alone in regard to their vices. Every society seems to harbor obnoxious busy bodies and arrogant moral crusaders, and wherever these people gain state support for their favored programs of suppressing vices, the outcome is horrendous. States can do many things, especially such things as committing mass murder, mass extortion, and mass theft and carrying out the relentless bamboozlement of their subjects, but among the many things that states cannot do successfully is the enforcement of virtuous behavior. Trying to make people refrain from doing what they wish to do, especially from taking actions that have no true victims other than those who voluntarily assume the risks, is a fool’s errand, and it is also a type of state coercion that has caused untold needless suffering through the ages and continues to do so today.

Long ago, in 1875, Lysander Spooner wrote a classic essay, “Vices Are Not Crimes.” It would be a godsend if people today were to read it and take its message to heart.

First, virtuous behavior that occurs because the government threatens to punish those who do not act accordingly is not actually virtuous; it is merely obedient. Genuine virtue can spring only from freedom to choose between virtue and vice. If the choice reflects not a free decision to act virtuously, but only a desire to avoid the government’s punishment, no real virtue exists, only compliance compelled by fear. Such compliance is especially regrettable in the not-uncommon cases in which the government seeks to enforce a wrongheaded conception of virtuous behavior (e.g., refraining from using marijuana).

Second, the agencies that can actually promote genuinely virtuous behavior—families, churches, private charitable organizations, private business enterprises—do so vastly more effectively than governments can, mainly because they are connected with those they instruct by ties of personal affection and personal interest, not by fear of punishment. Moreover, the instruction in these private realms takes the form overwhelmingly not of preaching or browbeating, but of immediate example. Nothing promotes kindness, for example, so much as being reared by parents who are consistently kind. Likewise, nothing promotes charity so much as membership in a church, synagogue, or mosque whose members personally and as a group routinely engage in charitable activities. Learning by doing works as effectively in regard to virtuous behavior as it does in artistry, craftsmanship, and athletics.

Government at best (and always as little more than a liberal ideal) is an agency for the suppression of anti-social actions such as murder and theft. Government enforcers comprise police who beat or kill people, prison guards who cage them, and hangmen who execute them. Kindness, charity, and other virtues do not belong to their repertoire. To suppose that the promotion of virtuous behavior can or should be effected by cops, wardens, and executioners is a fundamental mistake—and an enormously destructive one, to boot.