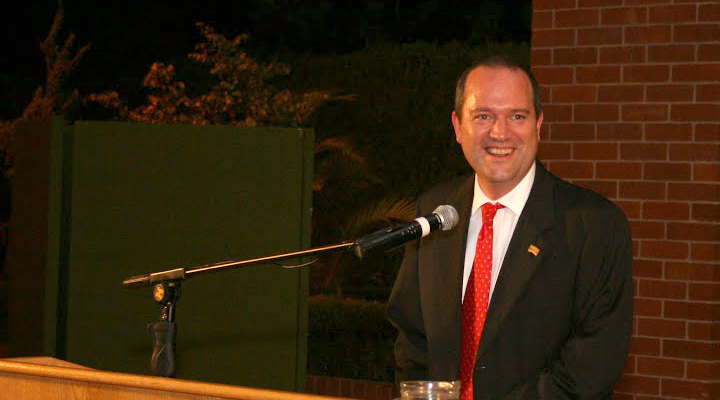 Yesterday my heart sank when a former colleague sent me a note saying, “The greatest man is gone... Giancarlo passed away.”

This “greatest man” was Giancarlo Ibárgüen S., the former president of Universidad Francisco Marroquin (UFM) in Guatemala, who lost his seven-year struggle with ALS at the age of 53.

Giancarlo was my boss from 2003 to 2013, when I was director of the school’s New Media Department. More importantly, he was my teacher and mentor, a role model and a true hero of freedom. He introduced me to the teachings of the free-market, and by his example, he showed me how to live a life consistent with our shared principles and moral values.

Carrying the Torch of Liberty into the Digital Age

Giancarlo took his first steps on the path to understanding free-market ideas while he was still in high school. He had met UFM’s founder, the late Manuel F. Ayau, and would visit the university to audit classes. Many years later, he joined its board of directors, became a trustee, and took the role of general secretary (provost). In 2003, his influence on the university became even stronger when he became UFM’s president.

He always called the school Casa de la Libertad and also the “University of Free-Marketers” (a term coined by Dr. Joseph Keckeissen, the school’s former Austrian economics professor and one of the first students of Ludwig von Mises at New York University). He made sure that UFM—an early beacon of liberty in a region that has suffered much oppression—remained a welcoming home for all who love the ideas of freedom.

Under Giancarlo’s leadership, UFM transformed higher education. His implementation of technology in the classroom far surpassed the efforts of any other school in Latin America. He helped the university establish wireless internet connectivity in 1998, introduced software and hardware tools that enabled students and professors to interact more productively, began producing new media content in 2001, along with ebooks, and provided online access to the leading academic journals and other educational sources.

Giancarlo quietly delighted in seeing the faces of foreign visitors light up, astonished that a university in a developing country was so technologically advanced, even more than many better-known (and better-funded) universities around the world. He looked like a proud father, showing all these fantastic tools and projects, but he never took any credit for himself.

Giancarlo launched many innovative programs, but he also touched the very foundations of education. Deeply committed to the encouragement of independent thinking and non-coercive teaching, he promoted the Socratic method in the classroom.

“Teachers cannot, and should not, assume they know everything about the field in which they are supposed to be experts,” he told an audience at Spain’s Instituto Juan de Mariana in 2011. “Certainly they have a broader knowledge of the material being taught in the classroom than the student has. However, they cannot know all of the dimensions, variations, and possibilities that can arise through Socratic dialogue with a group of students who earnestly hope to cultivate their intellectual curiosity.”

Many Projects, Many Accolades

Educational technology and pedagogy weren’t Giancarlo’s only contributions to the advancement of liberty. Another that stands out is his co-founding of the Antigua Forum, an annual gathering in Guatemala of public-policy reformers and entrepreneurship from around the world.

He also served as chairman of the board of directors of the Centro de Estudios Económico-Sociales (CEES), a market liberal think tank in Guatemala City and precursor of UFM. In 2006 he served as secretary of the Mont Pelerin Society and chaired the organizing committee for its general meeting in Guatemala City. He also served as a board member of Liberty Fund, beginning in 2007; president of the Association of Private Enterprise Education (APEE) in 2007; the Hispanic American Center for Economic Research (HACER); and he was a board member of the Philadelphia Society and the Acton Institute of Argentina.

Several groups formally recognized Giancarlo’s contributions to liberty, as indicated by the scores of awards he received: the first Guardian of Freedom Award from the Acton Institute (2009); the Kent-Aronoff Service Award (2010) from the Association of Private Enterprise Education (APEE); Juan de Mariana Prize in Madrid, Spain, (2011); and an honorary doctorate in economics from Hillsdale College (2013). On August 19, 2013, he raised the Guatemalan flag at a ceremony at Banco Industrial in recognition of his contributions to Guatemalan society. He was also awarded the Manuel F. Ayau Prize from the Students for Liberty (2014); the Leonard E. Read Distinguished Alumni Award from the Foundation for Economic Education (2015); and in April 2015 he was recognized by Guatemalan Aggies (Texas A&M alumni) for his contributions to Guatemala and the world. There were additional accolades as well.

Giancarlo was an avid reader, particularly of the classics from ancient Greece, which he often reread. But one of his favorites books was Don Quixote, by Miguel de Cervantes y Saavedra. Asked in an interview why he loved this book, he replied: “For me, it was genius how Cervantes used a madman to criticize the powers of the time. In this sense, I think Cervantes had a proto-liberal spirit when criticizing power, and all power centralized in the different orders that prevailed in the seventeenth century. Why did so? To avoid censorship...”

A brilliant man who enjoyed learning about many different topics and disciplines, Giancarlo could converse on a high level about numerous difficult concepts. He was always open to new ideas, even the craziest-sounding ones. But he also delighted in spontaneous discussions about simple things, like the beauty of nature. Sunsets and songbirds sometimes made their way into his conversations.

In 2009 Giancarlo was diagnosed with ALS. In 2013 he passed the torch to a new leader to guide the university and to grow the hundreds of projects he started. But even after he stepped down, his agenda was still full. Many friends, former students, and current students requested appointments with him, and he kept mentoring and advising anyone who asked for help until the end of his days. Giancarlo had a rare gift: he could spark the hidden genius in each one of us, and once the light was on, he continued to nurture our progress toward self-discovery.

For me, working with Giancarlo was a great honor. He was the perfect leader: one who helped others see what he envisioned, rather than telling them what to do. He said that he never felt like an orchestra conductor, giving orders to the musicians in the pit. Instead he saw himself more like a member of a jazz band, keeping the rhythm along with the other players. His passion for the ideas of freedom was contagious, as was his enthusiasm, energy and happiness—even when his illness was at its worse.

He touched and inspired many lives. He had faith in the younger generation and saw education as one of the tools to battle evil. His passing is a tremendous loss to the liberty movement, but his legacy will endure. His disciples will continue the fight to build a better world—like Don Quixote’s Sancho Panza, except better equipped.

For many, the loss is deeply personal. I share in the sadness felt by those who knew him. I will treasure all the moments the UFM family and I spent with him. We had many adventures with our leader. I can say proudly that I lived in the Giancarlo Ibárgüen era. Being one of his “Sanchos” has been one of the most valuable gifts I have ever received.

To his family Isabel, Sofia, Cristobal, Sebastian, my condolences and prayers. To the UFM’s family, including the board of directors and trustees and especially to his loyal assistant Mayra Ramirez, who worked very closely with Giancarlo for more than 14 years, I share your pain. The greatest man, teacher, mentor, hero, and champion of freedom is gone physically, but he will always live in our hearts and minds.

It is time now, as Cervantes wrote, to “draw strength from weakness” and be grateful for the opportunity to have known him. Our treasure is to have witnessed the greatness of an incredible mind capable of making possible the impossible.