Why the Disadvantaged Bear the Cost of Police Militarization 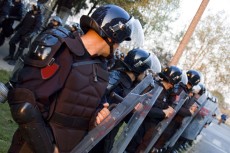 The deaths of Eric Garner, Freddie Gray, and Michael Brown over the past two years have sparked national protests. At front and center of these demonstrations was the issue of police militarization, the fact that modern-day police officers often look more like an occupying military force than “keepers of the peace.”

In addition to this issue, however, the deaths of these black men shed light on another important matter. That is, minorities are far more likely to have a negative experience with police than their white counterparts.

In a forthcoming paper, my coauthor Chris Coyne and I discuss this very issue, and provide an argument as to why racial minorities are more likely to bear the cost of police militarization.

Indeed, racial minorities are more likely to die while in police custody. According to data from the Bureau of Justice Statistics, blacks are about four times as likely to die in police custody than whites. Data from the CDC found that between 1968 and 2011, blacks were anywhere from two to eight times more likely than whites to be killed by police.

Just as racial minorities are more likely to be killed while in police custody, they are also more likely to be involved in SWAT operations (on the receiving end, that is). According to the ACLU, SWAT raids primarily impact persons of color. Between 2011 and 2012, approximately 50 percent of all SWAT raids were conducted against black or Hispanic individuals while only 20 percent of raids involved white suspects.

So why is it that minority groups are more likely to be impacted by police operations, particularly the rise of militarized police? We find that the work of Albert Hirschman (1970) offers one plausible explanation. Hirschman argues that individuals are faced with two options when they encounter difficulties within organizations to which they belong, including communities and larger governments.

The first option is that persons may “exit,” or withdraw from the relationship. In the case of problems within a community, a person could move to a new location. The second option Hirschman offers is what he refers to as “voice.” That is, individuals can express their grievances in an attempt to address and fix the issues.

For those groups most likely to be adversely affected by police militarization, however, neither of these options may be available, or may be incredibly difficult to use. Consider first the “exit” option in communities more likely to see militarized police. Financial constraints may prevent individuals from leaving. Consider that Hispanics are more than twice as likely, and blacks almost three times more likely, to live in deep poverty as whites. Given these constraints, the option to exit the community in which they reside may be extremely difficult, if not impossible.

My coauthor and I also argue there is good reason to think that the “voice” option may also be weak or absent for many minorities. Studies have found, for example, that increased racial segregation leads to a decrease in black civic efficacy. They find that segregated black communities are often represented by “public servants” who fail to vote for policies favored by black constituents. More recent anecdotal data falls in line with these findings. Consider Ferguson, Missouri. Although 67 percent of the town’s residents are black, there are hardly any black political figures.

If we take these two problems together—the lack of exit and voice options, it becomes clear why minorities are more likely to bear the brunt of the intense police activity.

Many individuals see enhanced police tactics, equipment, and other methods of social control as a positive. They are supposed to “keep us safe.” In reality, however, we find that these tools are often used, not in the name of preserving liberty and safety, to predate against the very citizens they are intended to protect. The cost of these activities, however, are not incurred by those making the decisions, but those who are least able to avoid abuses by the state.