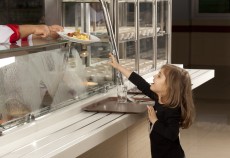 The Healthy, Hunger-Free Kids Act was championed by First Lady Michelle Obama and signed into law in 2012. A press release for the program issued at its launch claimed that the “new standards will improve the health and well being of 32 million kids.” Unfortunately for the children of America, the lunch line may be their first experience with government paternalism and a rough introduction to some fundamental economics.

The rules surrounding school lunches were “built around the recommendations from a panel of experts” and aimed to encourage some eating behaviors while discouraging others. The Act has become a textbook case of unintended consequences.

Instances of waste under the program have increased dramatically. Shockingly, as anyone with children, siblings, or just a little common sense can tell you, telling kids to eat their vegetables doesn’t actually make it happen. As opposed to pushing children toward healthier eating options, the new rules simply prompt kids to throw more food away. One report from the University of Vermont found that the amount of food thrown away since the new rules were implemented increased by a whopping 56 percent.

Not surprisingly, the taste of school lunches hasn’t particularly improved under the new rules. While I can recall days of oily pizza shaped like a rectangle, children today are met with whole grain biscuits (as a southern woman I say, “what?!”) and bland veggies. While I have yet to see any data on the taste of these new lunches, it’s telling that some young entrepreneurs have turned the new lunch rules into a profit opportunity. How? By selling simple spices like pepper, sugar, and salt to their classmates to offer some flavor to their food. As schools move to meet “sodium reduction targets” in the coming years, we can only imagine how much a third grader could fetch for a bottle of A-1 steak sauce.

Students aren’t the only ones suffering under the iron bran muffins of government. In addition to increasing food waste and the creation of black markets in salt, nearly a million students stopped buying cafeteria food the first year the program went into effect. In North Carolina, participation in school lunch programs declined by 5 percent, or about 13 million meals. Overall, nearly 60 percent of school districts said that participation in their lunch programs has meaningfully declined since 2012.

As a result in the drop in school lunch participation, some 80 percent of school districts have taken active steps in an attempt to offset the financial losses. Around 41 percent of schools surveyed by the School Nutrition Association (SNA) stated they tapped into their financial reserves as a result of the program. Thirty-five percent limited menu choices, more than 30 percent cancelled or deferred other investments, and nearly 50 percent said they reduced their lunchroom staff, either by cutting hours, laying off workers, or deferring hiring.

While the intentions of the First Lady’s lunch program may have been honorable, the Healthy, Hunger-Free Kids Act should serve as a cautionary tale. When government attempts to modify individuals’ behavior, a cache of unintended consequences is waiting around the corner. Ultimately, people find ways around the new rules. As the old saying goes, “out of the mouths of babes oft times comes gems.” This high school student from Twitter gets it.

Guess since they took munchies out the vending machines I’ll just have to go to the dollar general before school. Thanks Michelle Obama. –Kaitlynn Baston