Populist Fascism and the Politics of Class Resentment 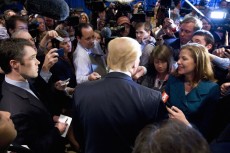 A while back one could have heard the masses chanting lustily, “Peron, Peron, Peron!” Today the masses can be heard chanting with equal fervor, “Trump, Trump, Trump!” And their gut feelings would seem to be much the same. Their dyspepsia springs, they suppose, from the evil machinations of the oligarchs whose actions have denied them the secure, well-paid jobs and the social respect to which they imagine themselves justly entitled—although prolonged meditation on moral philosophy cannot be said to occupy them much.

But in today’s USA they don’t need to take a college course in moral philosophy to know that the ruling classes, the mainstream media, the Hollywood producers, the educational elites, and all the rest of their self-appointed betters look down on them with the same contempt that the Argentine oligarchs once felt for the descamisados of that long-past time in another, once-prosperous land. Thus, the same politics of class resentment that brought golden Argentina to its near-Third World knees now bids fair to bring America’s own Peron to the throne sans Evita with a barge-load of economically destructive policies and attitudes in tow—especially the xenophobia, the protectionism, and the inward-looking, closed-borders mentality—that must have old Juan cackling with laughter in his grave. Demagogues are born, and demagogues die, but economically and socially destructive nonsense retains its force and appeal to the masses indefinitely. Not even widespread affluence can dispel economic ignorance and social resentment.

(N.B. In writing the foregoing, I am in no way endorsing any other candidate for the presidency. All of the leading contenders offer similar species of economic fascism and pose as strong leaders. However, they possess different bases of solid supporters, and, for example, the supporters of Clinton, Sanders, and Trump, despite some overlap in policy preferences, thoroughly despise one another in many cases. Thus does identity’s relation to ideology color and direct political preferences in this instance, as it usually does in any political contest.)