The “Joy” of Entrepreneurship 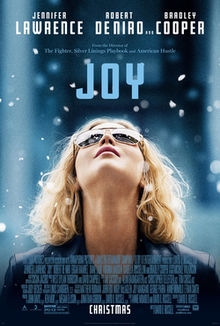 Jennifer Lawrence is up for Best Actress Oscar for her performance in Joy, a film loosely based on the entrepreneurial rise of inventor Joy Mangano. Lawrence may have a shot at the award after her Golden Globe win for Best Actress, and this would strike an important popular culture blow in favor of entrepreneurship. While not the strongest film of 2015, Joy is entertaining and one of the few mainstream releases that depicts the many gritty realities faced by real entrepreneurs in a positive and inspiring light.

As the real Joy Mangano says, as an entrepreneur “you have to be brave.” David O’Russell’s choice as director to focus on the human side of entrepreneurship, and his decision as a screenwriter to give entrepreneurial effort dimension through the characters played by Lawrence and Bradley Cooper, leads to a film that is more holistic and nuanced than most stories cast for the silver screen.

Mangano is the inventor of the Miracle Mop, a revolutionary redesign of the conventional mop that made the serial inventor millions of dollars. The film follows Mangano’s rise to wealth based on that invention. Lawrence’s performance is quite strong, and she really seems to understand the bootstrapping spirit of Mangano.

But the movie is more than a vehicle for Lawrence’s acting chops. As I watched it play out in the movie theater, Joy became less about one woman and more about the opportunities created by an economy that validates risk, hard work, and innovation through profit maximization. I saw this more clearly in Bradley Cooper’s performance as Neil Walker, an executive at QVC home-shopping network. Mangano’s personality and invention had caught Walker’s eye after she recovered from a botched demonstration. As Walker prepares the product to go on QVC, the disruptor in retail merchandising of the time, Cooper plays his character in a way that reveals the magic of this innovative retailing technology. As the hosts begin selling products, sale after sale registers on the monitors surrounding the set, and Walker’s character revels in the moment. Cooper practically puts a sparkle of joy in Walker’s eyes as he sees the sales numbers validate the story of QVC, and the enterprise that will soon dominate the retail marketing space. Walker’s innovative but corporate character compliments the gritty, down-to-earth nature of Mangano’s upstart entrepreneur in a way that fleshes out the spirit of entrepreneurship in a more powerful way than a strict biopic.

Joy comes back to its storytelling center as it spotlights Mangano’s challenges as a single woman starting up a business rooted on her own practical dreams and drive to find solutions to practical problems. Mangano in real life is a serial inventor, holding at least 100 patents. Indeed, a short video produced for her current shopping network, HSN, is titled “Seeing the Unseen,” and offers a window into how her mind—and many entrepreneurs’ minds—works. Mangano’s real-world experience combined with the storytelling by David O’Russell shows how it’s not just the inventor that drives success. Market institutions are essential for breathing life into these products—through businesses, prices and mediation—so that their benefits can be broadly experienced.

Joy isn’t a biopic, so the story is stylized for dramatic effect. (See here for what the movie gets right and what is embellished for entertainment.) But the challenges the real-life Joy Mangano faced as well as the fictional ones are real, poignant and inspiring. The real Mangano faced doubt from others, including her family, and had to overcome seemingly impossible hurdles at every step of her journey. She had to grapple with the demands of being a single mother (although her ex-husband provided emotional support in real life as well as the movie). She had to face challenges from family members interfering with her vision and undermining her enterprise. Like real entrepreneurs who start with an idea but do not have deep knowledge in their industry, Mangano had to navigate charlatans and greedy partners more intent on taking advantage of her lack of experience to enrichen themselves at her expense than build a business. But she overcomes it all, in the movie and in real life.

More than half my students in my social entrepreneurship seminar come from social sciences that are traditionally hostile to private enterprise and the role profits play in market economies. One of the more important lessons I hope they learn is that entrepreneurship is hard, and profits provide an important barometer for sustainability and value added. Dismissing enterprising people who start up their own businesses, and then become wealthy because of those efforts, belies the challenges, hurdles, and self-doubt that dog entrepreneurs all the time. It takes perseverance and, as Joy Mangano says, bravery to keep going.

Joy, thanks in no small part to the strong performances of Lawrence and Cooper, and David O’Russell’s decision to focus on the human side of successful entrepreneurship, has provided a popular vehicle for translating onto the silver screen some of these real-world hurdles and challenges.

Mangano’s story is inspirational, both in real life as well as on the big screen. Perhaps we shouldn’t be too surprised that the film won the Bradley Foundation’s Faith and Freedom Prize at the 24th Annual Movieguide Faith and Values Awards sponsored by the Christian Film & Television Commission.

Joy is near the top of my list of movies I will recommend to up and coming entrepreneurs.