In a recent New York Times commentary titled “Give States Control Over Public Land Out West,” Robert H. Nelson wrote: “The federal government owns almost half the land in the American West—even California is some 46 percent federal land.” Here is what surface and subsurface federal ownership looks like on a map. 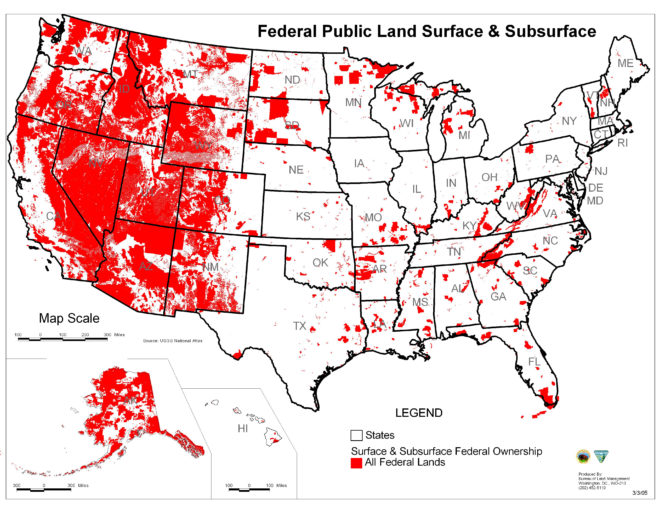 The theory behind federal land ownership, as Nelson noted, was that the feds would manage land “more efficiently” and by “the best experts.” But time has proven this to be untrue. Federal agencies that manage public lands such as the U.S. Forest Service and the Bureau of Land Management have been stuck in the quicksand of political gridlock and bureaucratic paralysis that prevent them from addressing quickly and effectively critical concerns of forest health such as wildfires and invasive species.

Nelson also noted that federal agency dysfunction prevents the proper management of “ordinary” uses of public land such as livestock grazing, timber harvesting, water rights, mineral rights, and trail and campground use. The current Bundy protest in rural Oregon has some of its roots in federal mismanagement and abuse of these activities.

California’s state park system is already a mess: environmental damage caused by overuse, fiscal scandals and misconduct including hidden financial accounts, and the planned closure of 70 state parks in 2012. The last thing that California state government needs is more public land to mismanage.

The best approach is to privatize all federal public land, with the exception of land ownership authorized by the U.S. Constitution for such things as military forts and ports. Private land ownership best accommodates competing interests such as ranching, farming, hunting, fishing, conservation, and residential and commercial use. Private ownership provides the correct incentives for wise stewardship of land, striking a proper balance between multiple uses. Government ownership, in contrast, often locks land into less valuable uses.

If you doubt that private land ownership can work for parks, visit the High Lonesome Ranch in De Beque, Colorado, essentially a 300-square-mile private “national” park. Private land trusts have worked well in California. There are more than 150 land trusts in California managing more than 2.5 million acres, an area larger than the size of California’s state park system of 1.6 million acres. Land trusts raise money voluntarily through foundation support and private individuals.

Robert Nelson closed his New York Times commentary by writing: “Privatization of the public lands is not the answer. It would face strong opposition even from most of the westerners now unhappy about the excessive federal presence.” But a contentious political fight is no reason to abandon the right solution.

It’s past time to auction federal public land so it’s in private hands not under federal or state government control.