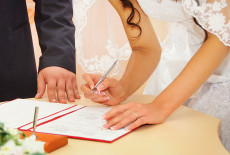 December is one of the most popular months to get engaged. It seems that every time I get on social media, one of my girlfriends is posting a photo of her left hand and new engagement ring. After getting engaged, and even before, many couples have already combined their lives. They share bills, checking accounts, other financial and life decisions, and live together.

Depending on where they live, that could make them criminals.

Yes, you read that correctly. In some states, like Florida, such couples could be fined $500 or spend 60 days in jail. Why? They are living together before they’re married. Under current Florida statutes, more than half a million people in the state could be convicted for the crime of “living in sin.”

To be clear, I’ve never heard of this law actually being enforced and I doubt confessing one’s living situation will cause any trouble. Given the fact that some two-thirds of American couples walking down the isle live together before marriage, many are calling for the law to be removed from the books. Other states have recently repealed their mandates against premarital cohabitation and a bill in Florida has passed in the Senate.

State lawmakers have pointed out that Florida is one of only three states (with Mississippi and Michigan) that still outlaws living together before marriage. They say such a law will have a negative impact on the state’s image. Moreover, the law does not apply to same-sex couples, making it discriminatory against heterosexual couples. While the law against premarital cohabitation in Florida may seem trivial, it is indicative of a larger problem. That is, why is the government involved in marriage at all?

Earlier this year, the Supreme Court legalized same-sex marriage. Many throughout the country celebrated marriage equality among heterosexual and homosexual couples. Others decried the ruling as an unwarranted, counterproductive, immoral, and foolish nationalization of marriage (see here, here, and here) and erosion of American social fabric. Once again I ask, why is the government involved in marriage in the first place? Last time I checked, my husband and I married each other. Same-sex couples are getting married to their partners. At what point did we and other Americans consent to enter into three-way marriages between our partners, the state, and ourselves?

There is no need for the government in marriage. A variety of people have made this argument, suggesting that state-sanctioned marriage does nothing but create problems. Having the state sanction marriages does nothing more than invite government expansion and intrusion into our private lives. As Colin Jones pointed out in The Independent Review almost ten years, it’s the fact that marriages have to be state-sanctioned that gave rise to the same-sex marriage controversy.

There is no reason why marriage shouldn’t be completely privatized. If we can contract for things like cars, life insurance, wills, power of attorney, and a house, why can’t couples come up with their own marriage contract? Are individuals not in the best position to understand their personal needs? Why is the state setting the terms of marriages and not the couples involved?

Many argue against such ideas from religious standpoints. This argument is invalid. If marriage is privatized, this doesn’t mean that churches or synagogues have to recognize marriages with which they don’t agree. In fact, it implies the opposite. If a church doesn’t want to recognize a privately contracted same-sex marriage, polygamous marriage, a marriage between formerly divorced persons, etc., they would not be legally compelled. They can recognize marriages that align with their institution’s beliefs and rules.

Others argue that privatizing marriage would be problematic because of state benefits. Under the current regime, marriage has implications for taxes, and legal and medical decisions, among other things. The problem with this, however, isn’t the idea of privatized marriage, but government benefits. It’s confusing two disparate problems.

The couples getting engaged this month will spend the coming months making big decisions about their weddings. On the “to-do” will be getting a marriage license. They’ll spend time and money to have Uncle Sam say they’re a legitimate couple.

Maybe by the time their children decide to get married they won’t have to get the state to sanction their relationship, or maybe they’ll decide to buck the system all together. After all, I guess their parents have set some kind of an example–you know, as cohabitating outlaws.