Trading Votes in Congress to Get Everything Politicians Want 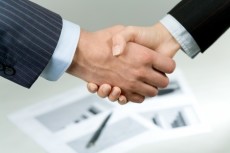 Any causal observer of the U.S. Congress and of state legislatures knows the definition of logrolling or vote trading: members of the House (and Senate) exchange votes with one another to secure passage of a spending program that benefits one of them, but not the other.

So, for example, Senator H agrees to support Senator J’s pet project (such as federal subsidies for building or expanding a harbor on the Atlantic seaboard) in return for Senator J’s vote on a NSA data warehouse somewhere in Senator H’s mountain west state. Neither spending program would pass if voted on in isolation because each’s benefits are concentrated on one state only. Why would Senator J vote for something that delivers federal funds to Senator H’s constituents and thus helps him or her to get reelected? After all, Senator J’s constituents may well rise up to punish him in the next election cycle because they will be forced to pay for Senator H’s project, but receive nothing in return.

But, if Senator H agrees to vote for Senator J’s harbor in return for Senator J’s support for the data warehouse, a mutually beneficial bargain can be struck. If enough such pairwise deals are agreed to, getting at least 51 senators and, in the House, 218 representatives on board, both chambers will approve spending money on the data warehouse, the harbor and any other “pork barrel” project requiring funding to assemble a working legislative majority.

Does all that pairwise deal making sound too complicated actually to work in practice? Another way of reaching the same goal is to put lots of pork into a single spending bill. With “sweeteners” for, at a minimum, half the members of the Senate and House, the bill will pass. Even fiscally responsible legislators will hold their collective nose and vote “Aye” because voting “Nay” risks losing the pork chops carved out for their own districts and states. Omnibus spending bills thus can be thought of as “implicit logrolling” or more commonly as Christmas trees (with ornaments hung for almost every politician).

The upshot is excessive federal spending on projects and programs that fail cost-benefit tests but elevate the reelection prospects of sitting members of the House and Senate. The president supposedly serves a broader constituency than any politician on Capitol Hill and might be expected to veto a spending bill that makes the nation as a whole worse off (total costs exceed total benefits), but will not if he or she favors bigger government.

The foregoing scenario played out during passage and signing of the five-year extension of the federal highway program in the first week of December 2015. Spending money to build and repair the nations’ roads and bridge network has been a poster child of pork barrel since time immemorial. Remember Alaska’s infamous “bridge to nowhere”?

This time around, though, taxpayers got more than they might have wanted. The Surface Transportation Act of 2015 revived the Export-Import (EX-IM) Bank – an institution that Don Boudreaux has called a “great geyser of crony capitalism”, and that I have railed against periodically over the past year, most recently with USU graduate student Michael Jensen here, and restored a federal crop subsidy program.

Those two provisions could have been excluded as not germane to the highway bill, but were inserted in a bit of legislative “compromise” to get support from opponents of EX-IM and crop subsidies who didn’t want to explain to constituents why they voted against money for local highway and public transportation projects.

Look no further for reasons why the federal budget is bloated and chronically in the red. It’s nothing more than public choice theory in action.