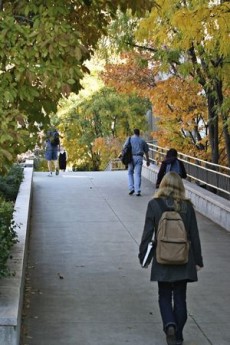 In an act of cowardice, the University of Missouri’s system president and chancellor resigned on Monday. Protestors, led by master’s student Jonathan Butler who went on a hunger strike, complained that the University did not side with Michael Brown against the Ferguson police force and has not taken action against “a slew of racist, sexist, homophobic, etc., incidents that have dynamically disrupted the learning experience” at MU. His letter referenced incidents of the MSA (Missouri Students Association) President Payton Head being called the n-word on campus from a passing pick-up truck, termination of graduate student health insurance subsidies, and cancellation of Planned Parenthood contracts on campus, and someone drawing a swastika in a student residential hall with their own feces. Protestors demanded that the chancellor “acknowledge his white male privilege, recognize that systems of oppression exist, and provide a verbal commitment” to meeting demands of the protestors. ( Interestingly, it has recently been reported that Jonathan Butler is the son of a railroad executive who made $8.4 million last year. That’s a lot of privilege buying power.)

It says a lot about MU that the student body president is black and that the incidents that led to a millionaire’s son to refuse food sound more like a couple of drunks with bad manners rather than some systematic problem disrupting the learning experience. Yes, the inmates are running the asylum at MU. But to make matters worse, the campus police are now investigating incidents of “hurtful” speech. Here is the email that went out according to the Volokh Conspiracy:

To continue to ensure that the University of Missouri campus remains safe, the MU Police Department (MUPD) is asking individuals who witness incidents of hateful and/or hurtful speech or actions to:

Delays, including posting information to social media, can often reduce the chances of identifying the responsible parties. While cases of hateful and hurtful speech are not crimes, if the individual(s) identified are students, MU’s Office of Student Conduct can take disciplinary action.

This gives a new dimension to the thought/speech police. At MU, it really is the police!! Considering that in America today being offended is a full-time occupation for many, the list of reportable crimes will be endless. I suppose this post criticizing the student protests and the involvement of the cops in investigating speech is “hurtful” to some. (I’ll remind the Independent Institute staff that “snitches get stiches” in case anyone there gives me up when the MU police come calling!) But seriously, college campuses should be places that welcome myriad ideas and open debate. What’s going on at MU with the protests and police-enforced speech codes does not further thoughtful examination of ideas, our society, or real changes that need to be made.

Protestors need to drop the “systems of oppression” lingo, focus on their studies, and realize that the only true oppressive danger in this whole mess is the threat to freedom of speech they have created.