Children Are Not Creatures of the State: New Hampshire Edition 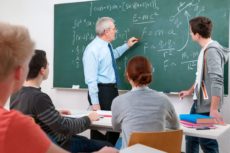 Politicians across the country like to claim that they’re all in favor of local control of education—until parents and their locally elected officials actually start trying to exercise it.

The small New Hampshire town of Croydon is a case in point.

Like many small towns in New Hampshire, Croydon does not have public schools to serve all grade levels so it contracts with education providers in neighboring towns. At issue now is the Croydon School Board’s decision to allow five elementary students to attend the neighboring Newport Montessori School. As Watchdog.org’s Steve Mac Donald explains:

State law allows towns to pursue these agreements, sending taxpayer education dollars to any accredited school, public, charter, or private, even in neighboring states, with the exception of religious schools. The local board, at the behest of voters, negotiates contracts and approves taxpayer-funded tuition payments to those schools. The money follows the student.

This plan has been in place for high school students for more than 25 years. Back in 2007 the Croydon school board began investigating ways to expand similar options for elementary school students. When it unveiled its choice plan for this school year, the state board cried foul and has threatened to withhold some $39,000 in state funding.

No so, counters Dr. Jody Underwood, chair of the Croydon School Board. Underwood explains:

Former State Supreme Court Justice Chuck Douglas agrees with the Croydon Board, and insists that Barry’s interpretation of state law is incorrect. As it stands now, the Croydon School District plans to fight the state in court.

Meanwhile there are several commonsense realities the court and parental rights’ defenders within and beyond New Hampshire should keep in mind. As Bill Walker recently argued in the Nashua Telegraph:

Why are high state officials spending our tax money to fight diversity in education? It’s not because they don’t believe in diversity for their own children.

Canada has had publicly funded school choice since the 1800s. In the province of Alberta, less than half the students go to the geographically closest school.

More than half of U.S. states have some sort of school choice program. ...

Choice is a long tradition in New Hampshire. The town of Derry sends its children to Pinkerton Academy; Coe- Brown Academy receives public students as well. The Rivendell District that serves Orford magi­cally mingles its tax funds with those from another state.

Walker is right. Using public funds for personal education choices is not an earth-shattering idea.

Vermont and Maine have had town tuitioning voucher programs since 1869 and 1873, respectively, and more than 9,000 students are currently using publicly-funded vouchers to attend schools of their parents’ choice in those states.

In fact, public schools across the country are spending more than $1.4 billion on private school programs, according to the U.S. Department of Education.

Nationwide, parents of nearly 130,000 students ages 6 through 21 with disabilities are also using federal Individuals with Disabilities Education Act (IDEA) funds to send their children to the private schools they think are best for their children, including religious, parochial schools. (My tally is based on 2013 data from the U.S. Department of Education Child Count and Educational Environments, 2013.)

And let’s not forget, currently, nearly 9 million college students nationwide are using more than $32 billion in Federal Pell Grants to attend the colleges and universities of their choice, public and private, nonsectarian and religious alike.

Finally, New Hampshire enacted one of the country’s most unique tax-credit scholarship programs in 2012. It allows businesses to take credits against their state taxes for contributions to non-profit scholarship organizations so parents can send their children to the private or home school programs of their choice.

Children are not creatures of the state, and public school officials in Croydon should be commended for their efforts to put the best interests of children ahead of petty, parochial politics.