Fossil Fuels Are the Lifeblood of Modern Civilization 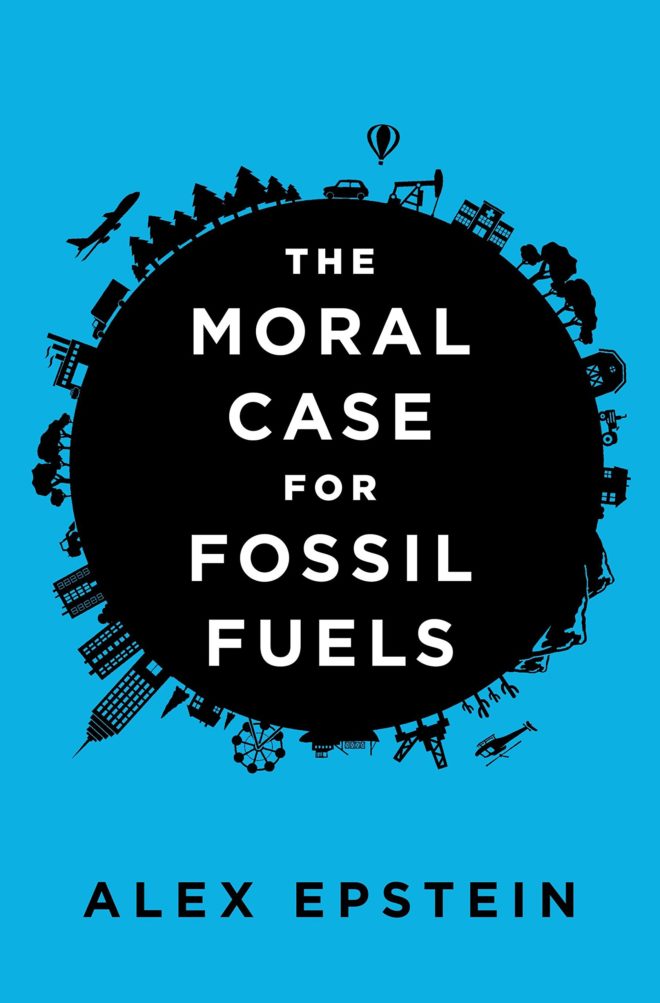 I never thought I would encounter a book titled The Moral Case for Fossil Fuels. After all, in this day and age, it is the politically correct and fashionable trend for activists, media, politicians, and even the Pope to call upon each and every one of us to break our “addiction” to oil.f

For as long as I can remember, my science classes from grade school through college carried some variation of the environmental message that warns of doom to future generations and our planet unless we embrace “sustainability” and drastically change our patterns of production and consumption. If we do not curb our usage of resource X and reduce humanity’s “impact” on the Earth, apocalyptic scenarios from overpopulation to reaching “peak oil” were bound to become reality.

But it’s now 2015, and the “population bomb” did not go off. And by every indication, we are nowhere close to running out of petroleum anytime soon (largely thanks to the shale revolution). Perhaps most astoundingly, even as human populations have grown dramatically and increased their use of fossil fuels, the world has become a much better place. This is the message that Alex Epstein emphasizes in his well-written, persuasively argued book.

What distinguishes Epstein’s work from so many other debates on climate change and energy policy is that his thesis gets to the core of the discussion: It is a moral argument. In making his case, Epstein presents a concrete and specific argument using human life and wellbeing as his moral standard of value:

Using this standard, Epstein clearly articulates the terms of the debate and lays out the costs and benefits of using fossil fuels versus alternatives. He reminds us that fossil fuels are still the only source of abundant, cheap, and reliable energy (solar, wind, biofuels, and other “renewables” all fail in one or more of these categories), and that fossil fuel use is essential to industrial civilization and, in fact, made it all possible from the beginning. Industrialization is what created the wealth and high living standards of the West. Today, China and India have experienced rapid economic growth and reduction of absolute poverty thanks to industrialization and the move toward freer markets. In short, billions managed to escape lives of misery imposed by Malthusian privation.

Furthermore, the countries that industrialized through increased use of fossil fuels saw not only a surge in economic prosperity, but also benefits such as increased life expectancy, cleaner air, cleaner water, decreased malnutrition, fewer deaths from infectious disease, and fewer climate-related deaths. The dramatic improvement in both environment and climate thanks to increased fossil fuel use is counterintuitive for many, but Epstein marshals an impressive array of data from respected institutional sources to highlight these trends. 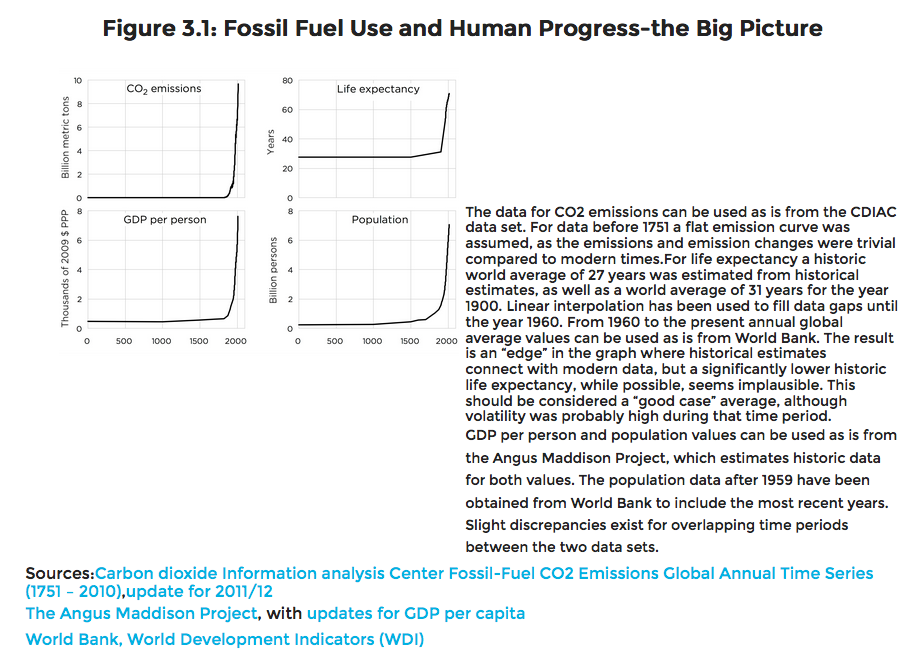 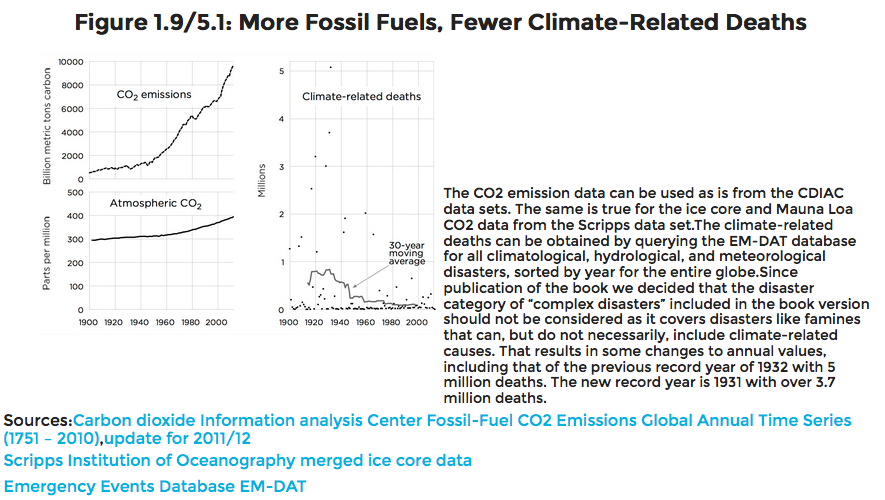 Of course, detractors will almost certainly retort that the “greatest threat” of our generation, global climate change, will undo all this progress, and that the continued use of fossil fuels will hasten the inevitable day of judgment. Epstein does not dispute the well-documented greenhouse effect from carbon dioxide emissions. However, he points out that the effect is logarithmic: Increasing carbon dioxide has resulted in a decreasing rate of warming.

Furthermore, Epstein raises crucial questions regarding the reliability of computer models in predicting future climate. For all intents and purposes, these speculative models have been failures.

Drawing upon his philosophy background, Epstein devotes a number of pages to explaining how people should find the truth by “treating experts not as authority figures to be obeyed but as advisors to one’s own independent thought process and decision making.” (He makes only a passing reference to the field of nutrition, noting that it “can literally be deadly for a scientist to spread a hypothesis as fact” after government adopts it as gospel with disastrous social consequences. Knowing this story in detail, I’m glad he did.)

In the spirit of F. A. Hayek, Epstein reminds us that honest and responsible experts are straight with the public about what they know and how they know it, and that they freely acknowledge uncertainties and limits of their knowledge, especially in a field as complex as climate science. Unfortunately, history has shown that experts have too often understated the benefits of fossil fuels while greatly overestimating their costs.

One particular positive impact of increased carbon dioxide (more plant food!) in the Earth’s atmosphere is the explosive growth in vegetation all over the world. Literally, the planet has grown greener thanks to fossil fuel use. Yet, this beneficial “fertilizer effect” is virtually unmentioned in the public debate on climate change.

Unfortunately, when it comes to evaluating costs and benefits of a technology, “those who predict the most risk get the most attention from the media and from politicians who want to ‘do something.’” Despite a history of failed apocalyptic predictions, environmentalist Bill McKibben, ecologist Paul Ehrlich, and other “experts” opposed to fossil fuels continue to endorse heavy limits if not outright bans on their use, as well as draconian population control measures to curb humans’ carbon footprint.

Going back to the moral argument, Epstein notes that the modern environmental movement argues on a completely different plane from his standard of human life. Instead of evaluating whether a given policy or technology benefits humanity, “green” activists tend to adhere to the idea that “non-impact on nature is the standard of value.” Thus, it’s really no surprise a strong anti-capitalist, anti-industrial, and misanthropic prejudice pervades the modern environmental movement.

Epstein decries the romanticizing of Mother Nature as a benevolent entity that looks after her children with their best interests at heart:

[T]he natural environment is not naturally a healthy, safe place; that’s why human beings historically had a life expectancy of thirty. Absent human action, our natural environment threatens us with organisms eager to kill us and natural forces, including natural climate change, that can easily overwhelm us.

It is only thanks to cheap, plentiful, reliable energy that we live in an environment where the water we drink and the food we eat will not make us sick and where we can cope with the often hostile climate of Mother Nature. Energy is what we need to build sturdy homes, to purify water, to produce huge amounts of fresh food, to generate heat and air-conditioning, to irrigate deserts, to dry malaria-infested swamps, to build hospitals, and to manufacture pharmaceuticals, among many other things.

That source of energy, of course, is fossil fuels. Only by transforming nature did human beings manage to create a safer environment, boost productivity, and raise living standards. The ability of humans to innovate and adapt to their ever-changing environments was made possible by fossil fuels, and our continuing progress as a civilization—including our lifting of billions out of dire poverty across the world—requires abundant, cheap, and reliable fossil fuel energy.

The Moral Case for Fossil Fuels is a much-needed counterpoint to the grossly one-sided ideological environmental crusade that too many people consider respectable and “mainstream.” I can’t thank Epstein enough for adding this valuable contribution to the public dialogue. We can only hope that more students, journalists, and government officials read this book, understand the big picture, and boldly take a stand for human civilization against the misanthropic forces that would all but tear it apart.