U.S. Has Less Economic Freedom than Chile, Jordan, or Taiwan 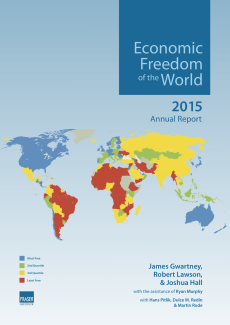 Today the Fraser Institute in Vancouver, Canada, released the 2015 Economic Freedom of the World Report (pdf) and it’s bad news for the United States, where economic freedom is falling. The U.S. ranks only 16th in economic freedom trailing Chile, Jordan, and Taiwan.

The EFW Report measures the level of economic freedom in 157 countries by gathering country-specific data on 42 distinct variables in five broad categories: (1) size of government, i.e., taxes and spending; (2) legal structure and security of property rights; (3) access to sound money; (4) freedom to trade internationally; and (5) regulation of credit, labor, and business.

Researchers James Gwartney, Robert Lawson, and Joshua Hall crunched the numbers (here is the master data file) and found that Hong Kong and Singapore once again occupy the top two positions. The other nations in the top 10 are New Zealand, Switzerland, United Arab Emirates, Mauritius, Jordan, Ireland, Canada, and the United Kingdom. Venezuela is in last place.

A 16th-place ranking might not sound bad, but the U.S. once ranked 2nd and has trended downward consistently since 2000. The EFW Report concludes: “Nowhere has the reversal of the rising [global] trend in economic freedom been more evident than in the United States.”

Today Chile, Georgia, Jordan, Qatar, and Taiwan have more economic freedom than the United States. The U.S. is now only slightly ahead of Armenia and Romania.

Since 2000, the “decline in economic freedom in the United States has been more than three times greater than the average decline found in the OECD,” the researchers note. The United States largely pays lip service now to free enterprise and individual choice, no longer a leader in either. What accounts for the fall of freedom?

The researchers list many reasons for the U.S. decline: increased use of eminent domain to transfer property to powerful political interests; the ramifications of the wars on terrorism and drugs; the violation of the property rights of bondholders in the auto-bailout; expansion of civil asset forfeitures; growth of non-tariff trade barriers, restrictions on foreign investment, and business regulations; decline in judicial independence and court impartiality; Sarbanes-Oxley, Dodd-Frank, and the Affordable Care Act; and nationalization of airport security by the TSA. There’s also the out-of-control Fed monetary expansion, and massive growth in government spending (military, entitlements, bailouts), which caused federal debt to balloon.

Each of these factors has resulted in more resources being extracted from the private sector, more controls being placed on consumer and business behavior, greater misallocation of resources due to price distortions, and an overall reduction in economic freedom, defined as a state where “individuals are permitted to choose for themselves and engage in voluntary transactions as long as they do not harm the person or property of others.”

Why should you care about the drop in U.S. economic freedom?

First, economic freedom is an end in itself; something each of us should cherish and protect because it allows each individual to pursue his or her passions and dreams and to chart his or her own course in life. Lord Acton said: “Liberty is not a means to a higher political end. It is itself the highest political end.”

Second, economic freedom enables greater prosperity. The EFW Report presents a series of graphics illustrating how greater economic freedom yields higher standards of living around the world. Two of the graphics are presented below. 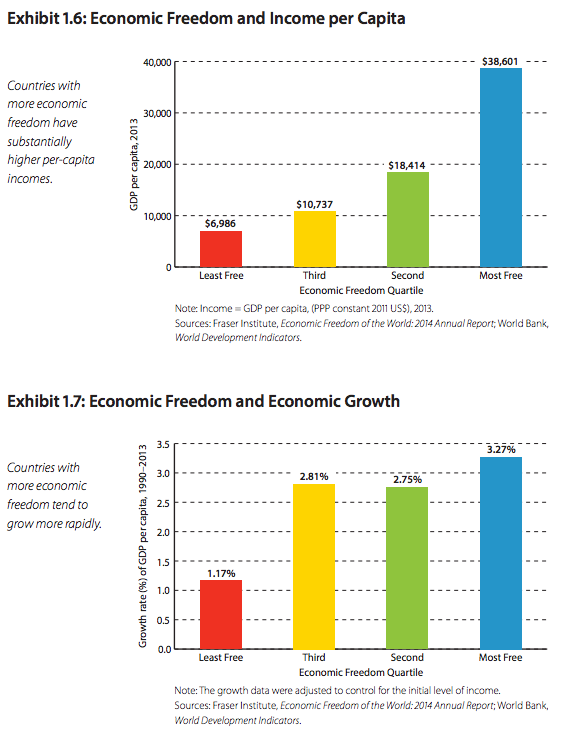 Economic freedom allows capital and labor to be allocated more efficiently using undistorted, market prices. And economic freedom allows proper incentives to emerge that encourage saving, investment, work, innovation, and entrepreneurship, the drivers of economic growth and prosperity. The EFW Report warns: “Unless [U.S.] policies undermining economic freedom are reversed, the future annual growth of the U.S. economy will be only about half its historic average of 3 percent.”

Whatever the motivation, individuals should cherish economic freedom and support the Independent Institute, Associate Member Sponsor of the EFW Report, which has fought every day for nearly 30 years to protect and advance liberty at home and abroad.