The Decline in R&D Efficiency in the Drug Industry

Panel “a” in the graphic below shows that the number of new drugs approved by the U.S. Food and Drug Administration (FDA) per billion U.S. dollars spent on research and development (R&D) in the drug industry has halved about every nine years since 1950, in inflation-adjusted terms. This represents a decline in drug R&D efficiency of around 80-fold, which should concern everyone. 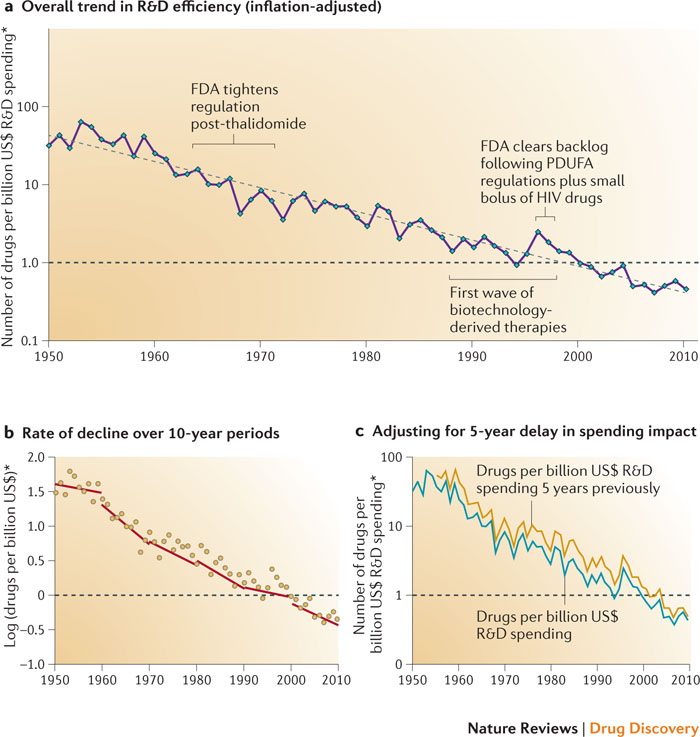 Panel “b” shows that, with a few exceptions discussed below, the rate of decline in drug R&D efficiency (as reflected by the slope of the trend lines) has been similar across different 10-year periods.

Panel “c” shows that the relationship between R&D spending and drug approvals holds up using different assumptions about the average delay between spending and approvals (the graphic above displays a 5-year lag).

There are many possible explanations for the decline in drug R&D efficiency, which Scannell et al. discuss in their paper. One factor is FDA policy itself.

following the 1962 Kefauver Harris Amendment to the Federal Food, Drug, and Cosmetic Act, which was introduced in the wake of the thalidomide drug safety disaster. For the first time, medicines had to demonstrate efficacy, and the safety hurdles were also raised. This reduced financial returns on R&D for a decade or so . . .

In contrast, there was a spike in new drug approvals in the 1990s that Scannell et al. attribute to two regulatory developments:

primarily the clearing of a regulatory backlog at the FDA following the implementation of the 1992 Prescription Drug User Fee Act (PDUFA), but also a small contribution from the rapid development and approval of several HIV drugs. In the case of HIV drugs, organized and politically astute lobbying effectively lowered the normal regulatory hurdles.

Drug innovation is too important to be politicized, but it is in the United States, unfortunately. And the tendency has been for regulators to ratchet-up their risk aversion over time, unless faced with severe political pressure to act otherwise (for more on the FDA’s excessive conservatism, and its negative impact on R&D investment, see Alex Tabarrok’s article “Is the FDA Too Conservative or Too Aggressive?“.) The FDA should be abolished and replaced by a more effective approach, as discussed in the book Hazardous to Our Health? FDA Regulation of Health Care Products.