Democrats and Republicans to Blame for Public Pension Crisis

I’ve appeared on more than 70 television and radio talk shows coast-to-coast in the past three months to discuss my new book California Dreaming: Lessons on How to Resolve America’s Public Pension Crisis. One common question has been: “Aren’t Democrats responsible for creating the unfunded public pension debt by over-promising pension benefits?” My answer, to the surprise of many hosts, is that it was a bipartisan failure to manage the pension funds responsibly. New evidence supports my claim.

Total unfunded public pension liabilities for state and local governments are $4.7 trillion, according to a recent analysis, which uses prudent accounting assumptions. The conventional wisdom, as illustrated by this quote from the Wall Street Journal, is that Democrats are largely to blame: “For decades, Democrats have bought union support in elections by using surplus revenue during good times to pad pension and retiree health-care benefits.” The evidence, however, shows that politicians of both political parties played the pension game.

The graphic below shows that Democrats in state legislatures across the country voted for state-level pension-benefit increases at a 97 percent rate from 1999 through 2008. Republicans voted for the same pension hikes at a 92 percent rate. Politicians of both parties hiked pension benefits to buy votes and campaign contributions from pension beneficiaries and their family members, pension-fund employees, union officials, and investment consultants, advisors, and brokers. 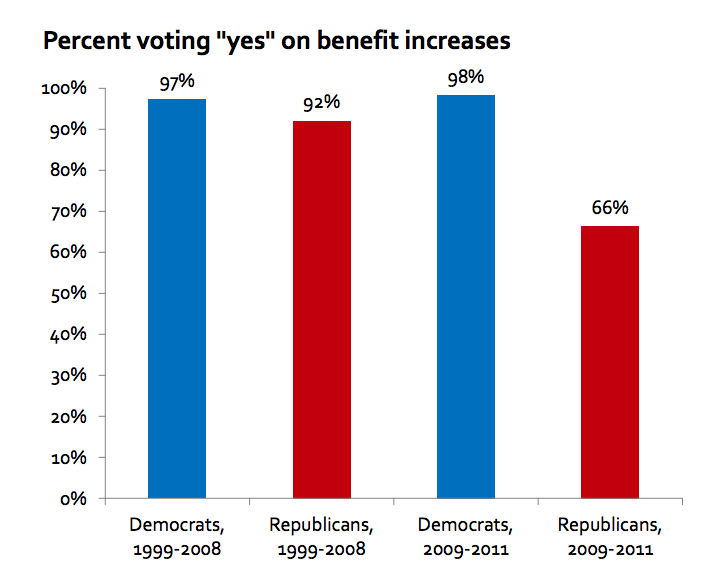 This time period of 1999 through 2008 was especially significant since it was when many of the largest public pension benefit increases in history were approved; including California’s retroactive pension hike, SB 400, in 1999.

Notice that after the Great Recession, 2009 through 2011, when the media and public became more focused on the massive pension debt, Republican support fell, although a strong majority (66 percent) still voted in favor of pension increases after the recession.

Politicians of both political parties got us into the pension mess, and now it’s time for voters to intervene and put an end to it. My book California Dreaming shows how to do it.