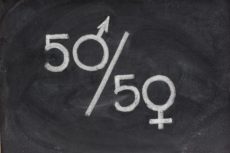 The quality of economic journalism in the United States is terrible. Day after day, journalists write about the causes and consequences of economic conditions and events without understanding the underlying economics of the situation, and their articles are, as a rule, simply bunk. Here is an example.

I have not examined the actual report whose findings are described in the article, but I am familiar with many studies of the same question that economists have conducted over the years. Moreover, I myself have made many applied econometric studies in a variety of areas, and I know how delicate the findings of such studies are to a variety of details—sample period, sample size, sampling method, data collection details, model specification, estimation methods, and so forth. I know, too, that the best studies—those with the best data, most sensible model specification, and most exhaustive set of controls—have found virtually no difference in the amounts that men and women are paid for doing the same work. The key is “doing the same work,” which is another way of saying “providing equally valuable services to the employer” in the sense of adding equally to the employer’s net income.

In any event, even if one had never immersed himself in such econometric nitty-gritty, he would have excellent grounds for skepticism. First, to say that women earn less than men is not the same as saying that the same employers pay men more than equally value-productive women. Earnings reflect many choices by women who work as well as by employers who hire.

If such were not the case, he’d be a very poor manager, because by paying, say, just $44.00 per hour, he could replace all of his current employees by hiring away those currently working for the lower-paying employer and save $2.67 per hour for each worker, or $40.05 per hour for his entire labor force, which would be a $40.05 contribution toward increasing his net income. Why would any employer forgo substantial additional net income simply to persist in sex discrimination in wage payments (which, by the way, has been illegal since enactment of the Equal Pay Act of 1963)?

If sum, the so-called gender gap is almost certainly a myth, a persistent misapprehension kept alive by leftists—feminist ideologues and politicians posturing as special friends of women—who wish to use the power of government to benefit members of their political constituency. If employers truly discriminate between equally value-productive male and female employees, however, they do so only in cases that are few and transitory, because the systematic, persistent conduct of such discrimination is inconsistent with everything we know about how people make decisions in labor markets and about what we presume business owners in general are trying to do, namely, make profits.

ADDENDUM: I’ve now taken a quick look at the underlying report, and it’s much worse than I’d imagined. It’s not even an exercise in multiple regression analysis, but a series of comparisons that control, so to speak, for only one variable (e.g., education level, occupation) at a time. This isn’t even up to the pathetic standard one normally sees in such studies. Horrible. Really, folks, there is a large, fairly sophisticated literature on this issue in the field of labor economics. The journalists ought at least to speak to some serious investigators in this heavily researched area before they publicize such shoddy, tendentious “research” as if it were the real deal.