A Chance to End the Great Recession

The current “Great Recession” has only been the second worst since the 1930s in terms of peak unemployment: Unemployment reached 10.0% in 2009, but hit 10.8% in 1982. However, unprecedented unemployment benefits that extend for almost twice as long as in any previous recession have helped make this the worst recovery from a recession since the 1930s.

According to a recent article in the New York Times, unless Congress acts soon, the unprecedented extended benefits will expire at the end of December and during the first quarter of 2014 (“Extension of Benefits for Jobless is Set to End,” Nov. 18). Congress therefore has a rare chance to end the “Great Recession,” through what might be called “creative inaction.” 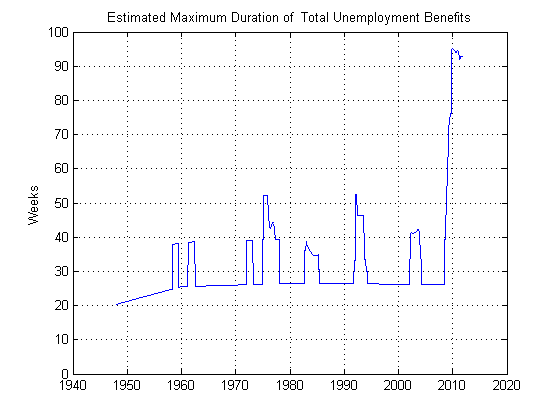 A permanent unemployment benefits program generally provides up to 26 weeks of benefits, but during periods of high unemployment, extended benefits that are jointly state- and federally-funded automatically kick in. Furthermore, Congress typically augments these with temporary “emergency” federally funded extended benefits during recessions.

During previous recessions, in order to receive the temporary federally-funded extended benefits, states have had to give up the federal subsidy for the state-federal program, and so typically have opted for just the federal benefits. But early in 2009, Congress extravagantly offered to pay for both programs. The result is that combined benefits from the three programs could go as high as 99 weeks in states with the highest unemployment rates. 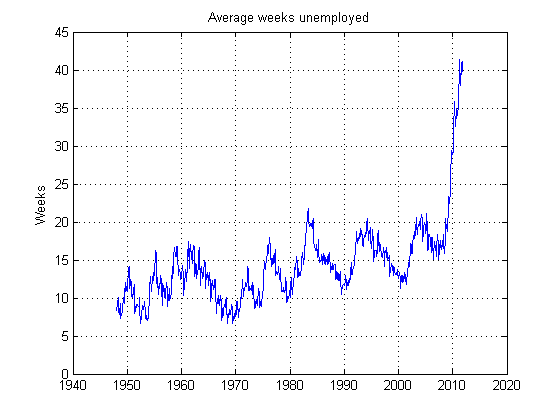 The level of unemployment benefits differ from state to state as well as over time. Generally, however, one must be employed for at least 12 months to obtain the full benefits, which are about 50% of what one was making before being laid off, up to a cap of about $350 per week in the recent years (or more with dependents). The pay is not great, but you can’t beat the hours, so that for someone whose pay has been under twice the cap, benefits can provide a strong incentive not to search very hard for a new job.

Even without extended benefits, unemployment benefits serve as an automatic destabilizer: If one is laid off during a boom, it’s easy to find a job that pays even more than one’s old job, so that the effective replacement ratio falls below 50%, and unemployment becomes less attractive than it would otherwise be. However, if one gets laid off during a recession, when the demand for labor has taken a negative hit, one will ordinarily have to settle for a temporary wage cut to become reemployed – the bad news about recessions is that they are bad news. The replacement ratio therefore rises above 50%, making unemployment even more attractive than otherwise, and making the recession even deeper.

Extended benefits that go up during recessions have an even further destabilizing effect that unnecessarily prolongs recessions. Once unemployment is high it tends to stay higher than normal until “emergency” benefits expire and trigger unemployment rates are no longer met.

Unemployment benefits are often touted as “unemployment insurance.” However, this is not a risk that any insurance company would undertake, because of the strong “moral hazard” it generates. Although it pays for itself in good times, the program typically runs a deficit during recessions, and this shortfall must eventually be paid for either by covered employers or the tax base as a whole – which mostly involves employment. According to the New York Times article, benefits have cost taxpayers about $250 billion already in the current recession.

Workers and the economy as a whole would be far better off if the entire program were scrapped and unemployment taxes eliminated. Workers would then be free to save what they would otherwise have put into the program for a “rainy day” spell of unemployment. These “precautionary savings” would not distort the labor/unemployment choice, and could eventually be spent on something else if all goes well.

It is often argued that unemployment benefits stimulate the economy, since a large portion of the benefits will be spent on consumption expenditures. However, this overlooks the fact that workers will make even more money when employed than when unemployed. Furthermore, employment actually adds to national income, whereas unemployment merely generates transfers from employed workers and other current or future taxpayers to the unemployed. The net result is to depress the economy, not stimulate it.

In order to qualify for unemployment benefits, workers must make at least a token effort to find a new job. The result is that employers are flooded with applications from workers who are underqualified or not seriously interested in working. This “congestion effect” is a serious externality of the program that makes it harder for serious job-seekers to find jobs.

A particularly insidious side effect of unemployment benefits is that they wean workers out of their job skills, making it harder for them to ever find good employment.

In early 2012, Congress voted to reduce the maximum regular plus extended benefits from 99 weeks to 73 weeks by the end of 2012 (not plotted). The result is that unemployment has receded moderately, but at 7.3% it is still way higher than necessary.

Congress should take the present opportunity to eliminate extended benefits altogether through decisive legislative inaction. Ideally, it would eliminate the “regular” program as well, but that would require a majority of both houses plus a presidential signature, and so is not in the cards at the present time.

Postscript: A second program that has aggravated the “Great Recession” for the least-skilled workers has been the 40% increase in the federal minimum wage enacted in 2007 and phased in over 2007-2009. In 2007, the old minimum wage was only binding on about 2% of the labor force, and no one imagined that a $7.25 minimum wage would ever make much difference. With the recession, however, the new minimum was binding on about 5% of the labor force by 2009. The result has been over 25% unemployment for unskilled, entry-level 16-19 year olds. For further discussion of the minimum wage, see Mary Theroux, “Just Say No to Jobs for the Young and Unskilled,” The Beacon, Nov. 11.