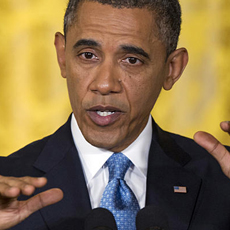 Thanks are due to the Wall Street Journal for running the impassioned speech of then-Sen. Barack Obama, delivered on the Senate floor, March 16, 2006:

Over the past 5 years, our federal debt has increased by $3.5 trillion to $8.6 trillion. That is ”trillion” with a ”T.” That is money that we have borrowed from the Social Security trust fund, borrowed from China and Japan, borrowed from American taxpayers. And over the next 5 years, between now and 2011, the President’s budget will increase the debt by almost another $3.5 trillion.

Our debt also matters internationally. My friend, the ranking member of the Senate Budget Committee, likes to remind us that it took 42 Presidents 224 years to run up only $1 trillion of foreign-held debt. This administration did more than that in just 5 years. Now, there is nothing wrong with borrowing from foreign countries. But we must remember that the more we depend on foreign nations to lend us money, the more our economic security is tied to the whims of foreign leaders whose interests might not be aligned with ours.

Increasing America’s debt weakens us domestically and internationally. Leadership means that ”the buck stops here.” Instead, Washington is shifting the burden of bad choices today onto the backs of our children and grandchildren. America has a debt problem and a failure of leadership. Americans deserve better.

I therefore intend to oppose the effort to increase America’s debt limit.