Why Not Gun Control for the Government? 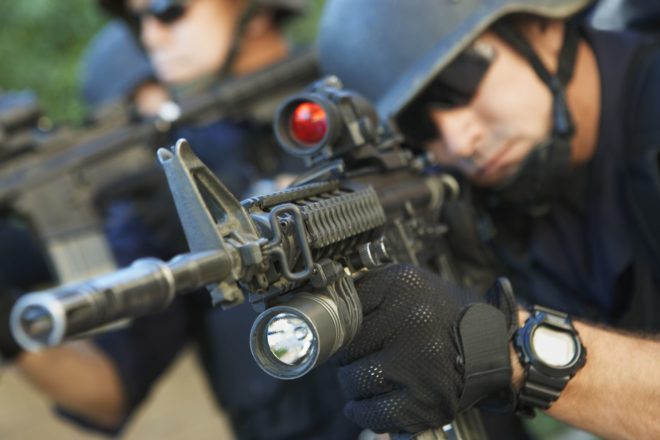 Whenever someone commits a particularly shocking crime with firearms—especially a horrific mass murder—there are calls for gun control. The reasoning seems to be that a law prohibiting the ownership or carrying of certain weapons will prevent or reduce the number of such atrocities. Although most other laws targeting ownership of contraband—such as drug laws—do not really work in keeping the barred items out of determined people’s hands; and although people bent on committing mass murder do not tend to be the more law-abiding members of society; we are supposed to believe that the way to stop violent crimes is simply to make it illegal to be armed.

On the other hand, government commits violence against the innocent on a daily basis. In foreign lands, hundreds of thousands have died in the last decade, in a killing spree unleashed by the U.S. government in response to 9/11. On the local level, police frequently brutalize the accused and taze, beat and shoot innocent people. The TSA has become an agency of routine sexual molestation. In detention centers at home and abroad, the criminal justice system has become an accessory to mass rape and gang violence. The feds commit torture.

Yet rarely do people suggest that gun control is the answer to these atrocities. And of course, what would that even entail? Disarming the police? That would be part of it, yet even that would not suffice, for so long as there is political power at all, we can say that Mao was right that it flows from the barrel of a gun. Government is institutionalized violence.

The state will necessarily abuse the coercive tools we allow it to have. The overwhelming majority of private individuals, however, will use guns responsibly, and in many cases defensively. Violent private criminals can never be stopped with gun control, which only empowers the state and predators, both private and governmental, while disarming the victims. Despite all these truths, a truly terrible crime as the one that occurred in Arizona is used to bolster the case for tipping the scales of power further toward those who do not feel bound by the law. This, also despite the fact that the government did not fulfill one of its purported functions here in preempting or rapidly stopping a massacre. Trillions of dollars of government. Millions of prisoners. Thousands not returning from war. But safety as the government promises it is an illusion, and its inevitable failures to secure total safety will always be twisted into reasons for giving it more power.

What matter most are culture and a respect for innocent life. And the killer in Tuscon had no respect for innocent life—this, more this his alleged hatred of government, is the clear value that we can assume from his behavior. This is more important than his reported fondness for Ayn Rand, Mein Kampf, or the Communist Manifesto; his obsession with literacy or the fact that people can legally carry guns in Arizona. They cannot legally commit murder, after all, and that law didn’t stop him.

But the state does not promote a respect for life. Yet after an atrocity like this, few suggest that it be limited, controlled or disarmed.