The Tangled Web of Anti-immigration Argumentation 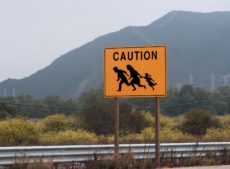 Probably the most often voiced objection to open immigration of all peaceful people is that “you can’t have open immigration and a welfare state.” (Even people as smart as Milton Friedman have made this objection.) But why can’t you?

In that case, the opponents of immigration claim that making the immigrants ineligible for welfare-state benefits won’t work because they will find a way to get the stuff in one way or another. But this objection is, in effect, a declaration that the state is incompetent—which is not exactly a news flash, to be sure. So the anti-immigrationists insist that instead the government must “close the borders.”

At this point, of course, some anti-immigrationists will claim that the government is not too incompetent to exclude ineligible recipients from receiving benefits, but is deliberately giving them the goodies in order to flood the country with more future Democratic voters and anti-capitalist residents. But if the government is thus engaged in a conspiracy against its own stated laws and policies, what difference does it make that the government purports to be closing the borders, whether with a wall or with a string of random tactical nuclear explosions along the border? If the government cannot be trusted to carry out its own stated policy in one area, why should anyone trust it to carry out its own stated policy in another area?

Oh, what a tangled web they weave when once they turn to the government to do—well, pretty much anything.