You’re Stupid, So We Are Going to Take Away Your Freedom 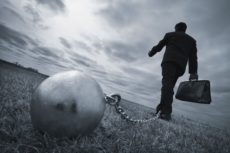 In a country based on the principle of liberty, should we really contemplate depriving people of freedom because they sometimes don’t make choices experts think are best for them? My title really understates the liberty-depriving philosophy of the nanny state. More accurately, it is: Some people make what we think are bad choices, so we are going to deprive everyone of liberty.

I’m thinking about this after reading Harvard Professor John Y. Campbell’s article in the May 2016 issue of the American Economic Review titled “Restoring Rational Choice: The Challenge of Rational Consumer Regulation.” Campbell reviews several bad financial decisions consumers tend to make, such as not refinancing their mortgages when it is financially beneficial to do so, and ultimately concludes, “The complexity of twenty-first century financial arrangements poses a daunting challenge to households managing their financial affairs” so “household financial mistakes create a new rationale for intervention in the economy.” People make financial decisions that Professor Campbell thinks are mistakes, so he wants government to intervene.

Professor Campbell has lots of company here. People argue that government should restrict consumer’s choices of what drugs to take (both recreational and pharmaceutical), force them to pay for safety equipment on their cars that that, as it turns out, can explode and kill them, force them to participate in a government retirement program, and even limit their ability to buy sugary carbonated beverages. In all these cases, the argument is that left to their own devices, people make “bad” choices, so the government should intervene to force them to act more (to use Campbell’s term) rationally.

Freedom has no meaning if people are only free to make the choices government experts think are rational.

The arrogance of this view of the appropriate role of government is striking. Progressive thinking from people like Professor Campbell and Michael Bloomberg concludes that they can make better decisions for you than you could make yourself; therefore, they will force you to do what they think is best. But ultimately, it won’t be Campbell or Bloomberg who will make those decisions for you, it will be a group of politicians who are more looking out for their own political futures than your welfare. Does government really make better choices for people than they can make themselves?

The nanny state’s premise that people should be deprived of their freedoms because they might make bad choices attacks the political philosophy upon which this nation was founded. If Campbell wants to spread the word that people are making what he views as financial mistakes, I’m all in favor of that. But it strikes at the ideals of the American Founders to suggest that people’s financial mistakes offer a new rationale for government intervention in the economy.